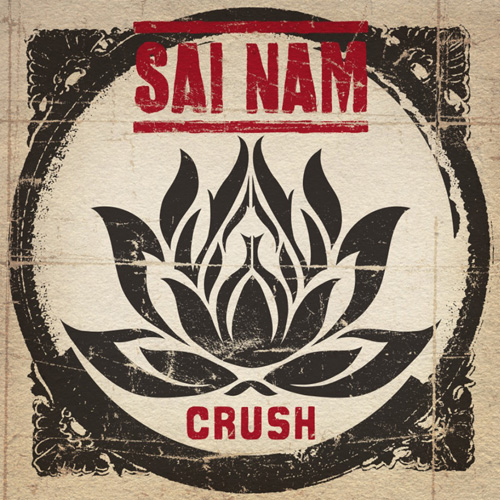 After some serious lurking on the Internet to the possible meaning of the band name I’m stuck on reviews about Sai Nam Chinese restaurants, hotels on TripAdvisor and a Sai Nam Thai fish farming industry. Unfortunately I found nothing meaningful about the band name. While surfing the world wide web for more info about this band “Crush” served as background music and this way the record had time to grow on me. This actually paid off in a positive way. Partly because Sai Nam play a style of music on their debut record “Crush” that I needed to give a couple of spins before judging. What made me very curious about Mike Dijan’s new band is what musical direction he is heading into with his most recent endeavor. But certainly also the singing of Justice, which I prefer live better than on any of the Trapped Under Ice records. Basically it is the combination of qualities both have that were reason enough for me to dig into this new band, that actually only consists of seasoned musicians with a rich past playing for numerous New York hardcore bands.

Even if you’re playing in a band with lots of experience that doesn’t say anything. So was, for example,  Mike latest adventure with “Lavette” one of a different kind. Despite the “Cro-Mags Malfunction” cover this band was not really my cup of tea.

It’s not that I want to compare both bands with each other, but fortunately Sai Nam taps from another vascular than Lavette. The good and – in the meantime – recognizable groove you can leave to Mike Dijan is key for Sain Nam’s musicianship. After all he is the legend who defined a style within the NYHC scene from the early 90’s on playing for Breakdown and later on Crown Of Thornz. Fans of Dijan’s guitar skills won’t be disappointed by “Crush”.

The song “At the mercy of a wicked world” with John Joseph on guest vocals even has a good “Bloodclot” vibe. Justice’s singing on “Crush” come to its own and fit the music well because of the melodic variation every now and then. Lyrically Justice sings about everyday issues like how humanity deals with the weird world we live in, is he angry about something that happened to him on a relational level, but does he also show his sensitive side in the tittle song “Crush”.

Must be said that the 10 songs on this record, which clock a little bit under 25 minutes are not disappointing at all. Definitely adequate enough for a good portion of distinctive New York hardcore showcased by Sai Nam.