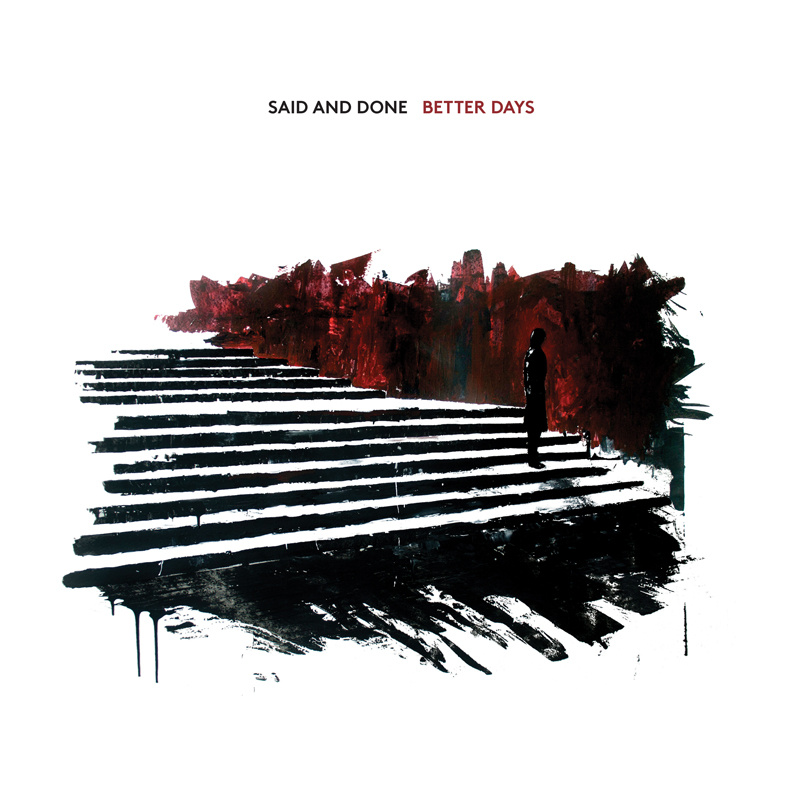 It was a little dilemma. I mean, when your own band releases a record and you even release the CD version on “Some Will Never Know Records”, it’s going to be quite difficult to get an objective review on the site you also run in your free time… So I thought about it for a second and actually rather quickly had an idea how to solve it. Why not ask Andrew Aversionline (formerly of Aversiononline.com and now noecho.net) if he feels like doing the review. I always loved his writings and luckily he quickly agreed, so here it is. Un-edited, un-altered etc. – Pim

When Said and Done’s vocalist, Pim Arts, asked me to write this review, I was informed (to be honest, it almost came across as a “warning”) that Better Days is a “rock record”. But going all the way back to “Rearrange” (to this day my favorite Said and Done track), from 2008’s Endless Roads, one could argue that it was obvious the band was destined to grow away from hardcore. I mean, you can’t deny that chorus (it’s actually catchier and more rocked out than much of Better Days, in some respects). Hell, skimming back through the band’s debut, Everyday, in preparation for this write-up, you can already see the signs in the way the vocal approach occasionally gravitates towards gruff hints at singing. It just took the music awhile to catch up—their last EP was released almost four years ago, after all.

So, I wasn’t the least bit concerned about this whole “rock” thing. I couldn’t care less whether or not something is “heavy” or “hardcore enough”, and at this point in time would likely be more excited about an album full of catchy, rock-leaning songs than another acceptable contemporary hardcore record with melodic flirtations.

And yet, I was still quite surprised by Better Days. Knowing that Pim has a soft spot for Nirvana, and having discussed with him our mutual admiration of newer bands such as Daylight, I think I was anticipating something perhaps… “grungier”? I had quickly sampled “Sheltered” online prior to receiving the CD in the mail and was, surprisingly, a little unsure; so I decided not to listen to anything else until I had the full album in my hands.

I think my initial reaction may be largely owed to the production, which is very dry and natural. The guitars have eased way back on the distortion, which lends more breathing room to the rhythm section (which sounds phenomenal), but also lacks impact to a degree. “Classic Story,” for example, would’ve essentially fit in just fine on any of Said and Done’s prior releases, but in this context the openness of the recording changes up the vibe in manner I can’t quite pinpoint. Atmospherically the only comparable album that immediately jumps to mind is Beggars and Gentry’s Abwärts(which, I just discovered, was also released by Cobra Records, coincidentally)—though Said and Done’s riffs are probably less blatant on the rock ‘n’ roll tip. Don’t get me wrong, though, as a whole Better Days sounds very professional—most impressive considering it was recorded by the band in their rehearsal space. (They’re also quick to point out that the album wasn’t normalized during the mastering process, which is absolutely something I can appreciate.)

Of its 11 tracks (including an unlisted, untitled song tucked away at the end after some silence), the compositions generally follow a bit of a slower, more deliberate pace (despite the fact that pretty much every song runs less than three minutes). So, at just about a half-hour, it still takes some time to digest, as the band’s consistently strong songwriting only occasionally connects on the first pass. That type of subtlety can be cool, however—allowing you to discover new bits and pieces on subsequent listens.

Taking the fourth slot on the disc, the title track is the first piece that stands apart—slowly building into an explosive, overtly catchy chorus with hints of ringing dissonance. And my initial reaction to “Sheltered” was premature. Sitting down with the entire album, in headphones, it’s turned out to be one of the finer songs herein—once more with an admirably memorable chorus (a trait I find myself favoring more and more in my old age). “Crossroads” is another early favorite: Energetic, straightforward chord progressions with quick little lead melodies, great backing vocals, and even an unexpected dash of cello!?

The 12-page booklet includes all of the lyrics (which just barely touch upon “political” matters, and even then from a personal perspective, generally favoring an attempt to draw inspiration and encouragement out of general hardships) alongside brief snippets that offer insight into the meaning behind each song. And the impressively crisp, clean design follows the minimal color scheme of the stark illustrations appearing throughout (most notably on the cover).

In the end, I think my overall interpretation of Better Days is that the best is yet to come. I do think the material could benefit from a bigger/brighter production approach (such as that utilized by Daylight’s Jar album, as cited above), but that might be completely contradictory to what the band is trying to achieve, and is really only an isolated piece of the larger puzzle. This is obviously a transitional record, and you can pick up on a sense of hesitation from the band—as if there’s a fear that this shift in direction might be rejected. But I think they’re already realizing that the listeners are on board. We don’t mind. We’re still fans. It’s an exciting possibility to imagine what will happen if the reality of the situation—that we listeners are still here (or that ultimately we don’t matter anyway)—restores and invigorates the band’s collective confidence: Loosening them up for more comfortable and carefree songwriting. Might it yield bigger, bolder… even better days? I, for one, will still be around to find out.