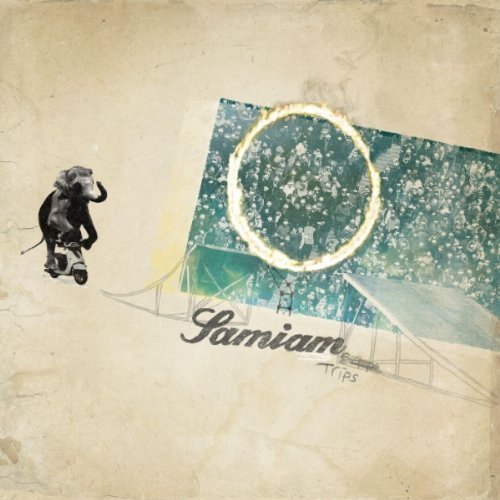 Remember Samiam? Of course you do. The band had some major successes in the 90’s, touring with bands such as Bad Religion and Green Day. Now, after five years, they’re back with another punkrock gem called ‘Trips’.

It’s not often that a band comes back with a solid release after a few years of absence. But Trips is an exception to that rule. The record starts off with ’80 West’, a song that makes you want to raise your fist and sing along as hard as you can. Catchy riffs combined with fast paced drums and loads of melody. Even the lyrics seem fitting somehow: ‘I’ve been away for too long.’ It could almost be a reference to their five year break.

But to be honest, the break has seem to have done the band some good. Samiam sounds fresh and more energized than they have been since their last release. Maybe it’s the clear production the record has, which might be the influence of producer Chris Dugan (U2, Green Day, Iggy Pop). Trips has a slick sound, but not too slick it makes you cringe. The record seems to continue where ‘Astray’ left off, but with an even more indie sound to their music. And in my opinion their more poppy songs are the strongest on the record. But don’t expect a cheesy record. Samiam manages to balance in between feel good punkrock and darker, deeper songs.

I feel the record could’ve done without the semi-acoustic closing track ‘Happy For You’, but apart from that Samiam delivers a well written record with catchy indie poppunk songs. Sure, Beebout’s vocals don’t sound as raw as they used to, but it doesn’t matter when you hear the variety he adds to the songs. Sometimes he sounds brittle, sometimes energetic. It fits right in with the different moods on this record.

If you liked Astray, you will sure like Trips. Samiam brought us a solid release, making the five years wait well worth.