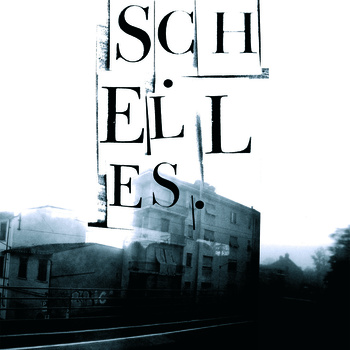 The band Schelles comes from Roosendaal in the Netherlands. They play punk music and started doing that in 2010. This is their `fine debut album. The album has no title.

These guys got experience in other bands in the past, like Envy The West, Zachte G Harde P, Otis, Lugosi and probably a dozen more that I forget here. They did a lot of bands. The name is derived from regional slang for being told of, specially when one is naughty. They’re a nostalgic band that sounds like The Minutemen and NoMeansNo.

Opener ‘The Big Sleep’ lets you hear jangling guitarwork that hecticly shifts back and forth, while the drum sounds primitive and frantic. Vocals are barked with an ironic tone. ‘Pastiche’ feels a bit calmer. The vocals fade to the background on this more rhytmic track`. It generally feels like a fun record, with songs like ‘Secret Sharers’ and ‘Time Bomb’ generally taking the charm from the enthousiasm of the band members.

All in all that creates an album that feels unforced, natural and charming. The recording doesn’t seem to have been an intense process of polishing and overdoing, but was done in a way to convey the band as it is. A good thing in my opinion. Nothing fancy, just punkrock here. ‘Pistache’ displays that these guys can do a lot more things, where ‘Wanna Be Wild’ is a weird track that doesn’t really seem to go anywhere.

‘Talking’ World Police Blues’ feels a bit more ninetees punkrock, and features long breaks between the dissonant guitar waves. ‘On Building’ closes the deal on a more gentle note. This album is fun, check it out!