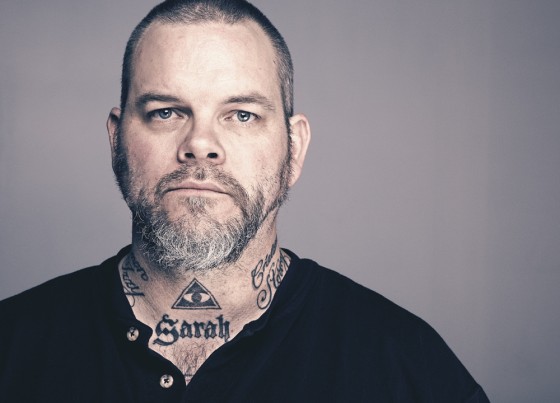 It’s always interesting to see creative people outside of their comfort zone. While Scott Kelly is best known for his band Neurosis he also tours as a solo-artist occasionally. Since I had the chance to check that out close to home I decided to get my raincoat on and head over to the 013 stage.

Those attending the show who thought ‘Hey it’s an acoustic show I can leave my earplugs at home’ probably did suffer a lot during Syndrome’s performance. Syndrome is the solo act of Amen Ra guitarist Mathieu Vandekerckhove. And I think there are quite a lot of similarities between the ‘mass’ of Amen Ra and the performance of Syndrome. There’s the same eerie feeling and dynamic going on. It’s pretty hypnotizing how Vandekerckhove builds layer upon layer of sound and takes the audience into a particular state of mind. Though for those already suffering from depression I’d say Syndrome is the last thing you should check out.

‘Thank you for coming out on the last night of your lives’. Scott Kelly doesn’t say much between his songs, but when he does it’s right on. Where Syndrome performed in the dark with black/white images behind him on a large screen, Scott Kelly takes a more old school approach of a man standing in the light with his guitar. He plays songs from his whole discography and it’s hard not to think of a stripped down one man Neurosis.

During the set Kelly explains that ever since he started writing songs 31 years ago, aged 14, the same kind of thing has been coming out of  his mind. Songs about death. There’s one song in his discography that stands out in that way because it’s about his family. He explains how that song came to be and how he initially was afraid of playing it since it’s so different from his other material. In my opinion that’s one of the reasons why that song was one of the highlights of the whole set.

Kelly finished his one hour set with a song by Townes Van Zandt.

The apocalypse didn’t arrive and I was soaking wet after my ride home.