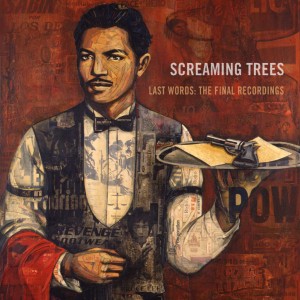 Screaming Trees? What’s going on? This is a hardcore / punk site right? Are we being hacked? No, relax. As you might know by now, SWNK is just not that closeminded. Now and then we might review something less obvious. If it’s good, it’s good right? And being the nice folks that we are, we don’t want you to miss out on anything good. Like this record.

To satisfy the purists out there, there’s some punk connections to the Screaming Trees. They released records on SST and the guys in the band grew up listening to a good dose of 80’s punk (amongst others). But their biggest hit was a song called “Nearly Lost You”  that was used in the movie “Singles”. Sell-outs right? Maybe, they never got the fame or recognition Nirvana, Pearl Jam or Alice In Chains had though. But as far as I’m concerned they fit right in with those bands. And that’s a compliment. A huge one. I’ll raise it. I’ll pick Screaming Trees over Pearl Jam any day, probably even over Alice In Chains. I’m not saying they’re better, I just, personally, like em better.

You see, I love the Screaming Trees. I’ve been putting “Shadow Of The Season” on mixtapes for quite some time now (see mixtape #1 that came with SWNK back in 2008 for instance) and their best of “Oceans Of Confusion” has been played to death over here. Those songs just hit me the right way for some reason. Of course there’s Mark Lanegan’s deep voice that I can hear any day, any time, but it would be a shame to not credit the band properly. Good tunes all around.

So when I heard the band recorded some songs before they split up in 1996 that they were going to release themselves, I got pretty excited. And they didn’t dissapoint! Damn, there’s some great tunes on this record again. Take the opening song “Ash Gray Sunday” for instance. It starts with some nice and subtle guitar tones, then the drums come in and when Lanegan’s voice kicks in you’re hooked already, again. And that’s only the first 30 seconds. It sets the mood for the rest of the album right away. This record is going straight into my yearlist, without a doubt.

Man, can you imagine these 10 songs collecting dust on a shelve somewhere? It only makes you wonder what great stuff is out there by other bands. I could go on forever, but just listen to the song below and you’ll know right away if this your kinda thing or not. If you like the song below, go pick up that record (only available digitally at the moment I’m afraid). Actually, in that case it would be safe to pick up anything they ever released. You might want to start with their best of, called “Oceans Of Confusion” and go from there. Or pick up this new release and work your way backwards. Where the first material is a bit rawer, they only got better and better later on. It doesn’t really matter, it’s all good.

You didn’t like it? Well… you might want to check your ears. You do have ears right?