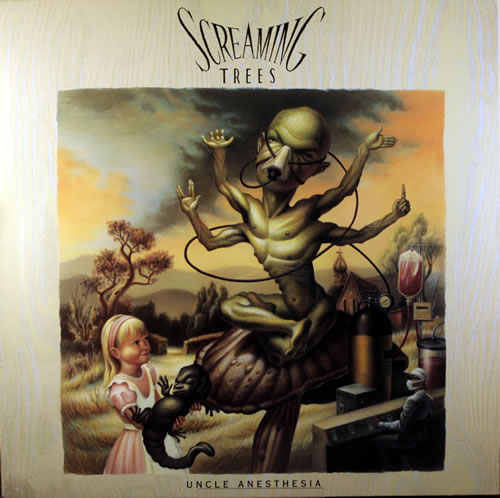 “Those vocals, holy shit!” If I were a girl Mark Lanegan could probably mumble the phonebook to me and I’d still melt away. That’s how much I love those vocals. And I knew that of course, this album isn’t new to me. But still, every time I hear a Screaming Trees song that’s the first thought that pops into my mind. But I already confessed my love for this band in the review I did about the record they released last year, so I’ll try to keep the hysterical fanboy stuff to a minimum.

I can actually (try to) be pretty short about this reissue. It’s pretty simple: If you have the original album there’s not much reason to pick up this record. The packaging is the same (aside from the cool cover drawing the layout’s pretty lame). And like the original, there’s no lyric sheet. It’s not remastered and there are no bonus songs or something. But maybe you can convince yourself you need a new copy, because you played your old copy to death or because this one’s on 180 gram vinyl. Never a bad thing of course. For everyone else, those of you who still miss this record in your lives I can wholeheartedly recommend picking it up. While it’s not as good as Sweet Oblivion (also available from Music On Vinyl), it’s a damn great record. Recorded back in 1990 (yes, this is pre-Nevermind kids) I’m pretty sure it will sound as fresh in 10 years as it sounds today. Timeless music. It’s a good thing this will be made widely available again for a normal price.

For the people into trivia or Soundgarden fans: A couple of songs feature backing vocals by Chris Cornell (Soundgarden) and he also handled the production, together with Terry Date (Handsome, Soundgarden, Pantera, Deftones and many more).

And before you run to the store: Hold your horses, this reissue is available starting the 1st of October. In the meantime here are two videos of my favorite tracks of the record, Ocean Of Confusion & Alice Said. Great band right?

Oh and Music On Vinyl, how about putting Last Words – The Final Recordings on a piece of wax too?