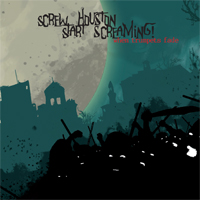 Screw Houston Start Screaming! (yeah I know about the bandname, then again there are also bands around called We Better The Bread With Butter and what about I Wrestled A Bear Once. Point taken? Okay let’s proceed with the review) is a band from The Netherlands. When Trumpets Fade is their second release, being backed by six labels.

I don’t know about you but I often get the gibberish when I see a whole list of label logos on a record. Usually it means that A. the band isn’t good enough to be signed be one of the bigger labels around or  B. that the band consists of some very hard working stubborn guys who want there music to be available on cd in as many countries as they can (I’m looking at you Antillectual!).

I don’t know the guys in Screw Houston Start Screaming! personally so I can’t see they’re hard working stubborn guys. Still after listening to When Trumpets Fade I have to go with option A. It’s not that this is a very bad ep, but the band misses the one thing that might make them stand out: a sound of their own. More precise a cohesive sound. The songs on this record range from The Bronx-style rock to Give Up The Ghost’s rendition of hardcore to more varied stuff added with parts Comeback Kid. Only less well executed.

To me that’s the biggest ‘problem’ I have with When Trumpets Fade, it doesn’t sound as a tight unit. The other thing is that none of the songs really stick out. You can listen to the whole record five times in a row and afterwards still not be able to hum along to one of the tunes. I’m a sucker for good melodies and hooks and while Screw Houston Start Screaming! is a melodic band they don’t seem to have made an effort to record some songs that really grab you by the throat. Songs you just want to hear again and again.

If I was the jury in an X-factor for hardcore bands I would tell this band to choose one sound and go from there. It’s great that you’re all talented and like different kinds of music, but it doesn’t seem to work when put in one band.