Self Defense Family – You Are Beneath Her 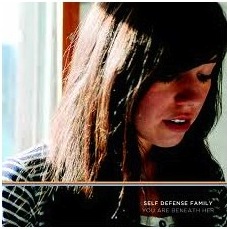 Patrick Kindlon is one of those people considered either a musical genius or a dull sack of shit. His band Self Defense Family keeps their output high with a solo EP The Corrections Officer In Me on Family Drugs and several splits this year alone. You Are Beneath Her is the most recent EP with almost fifteen minutes of re-recorded songs of You Are Beneath Me with vocals by Caroline Corrigan.

‘Eric Hall’, ‘Jeni Leigh’, ‘Marissa Wendelovske’ and ‘Philip Jose Farmer’ in her voice sound great. The band seems to have slowed down a little and adjust some minor keys to accompany her voice opposed to the ragged vocals of Kindlon but it works out very well. It adds a dreamy touch to the desolate atmosphere of Self Defense Family. ‘Marissa Wendelovske’ is a great example, the guitars with the new vocals work out great. The post hardcore sound has almost completely been abandoned in favour of hooks laden pop music. A song like It’s Not Good For The Man To Be Alone from their previous EP sounds like it has been recorded by a whole different band.

And that is the main issue people could have with You Are Beneath Her. It does not sound like our beloved post hardcore group. That being said, the identity of Self Defense Family is still intact and very clearly heard on these four songs.