Setback – Step Up Your Game CD 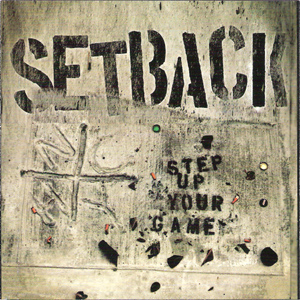 Setback from NYC was around from 1991 until 1998. In that time they managed to release a demo in 1995 and a MCD in 1997. In 2008 they decided to return, and since then have already released a MCD in 2009 and now their first full-length called ‘Step Up Your Game’, both on their own label, Crash Course Records. As the title suggests, the band has stepped up their game compared to their previous releases. This album is Setback at its best with their brand of uncompromising hard, heavy and tough NYHC.

‘Step Up Your Game’ has 11 new songs and 2 re-recorded songs (‘My Way’ from their 1997 ‘No Hope…’ MCD and ‘Talk Shit/Get Hit’ from the 2009 ‘Unfinished Business’ MCD). It says a lot that ‘My Way’, which is 15 years old, still fits in well with their current material, while still sounding fresh and not dated at all. Setback has always stood for a certain style and sound, and they’re not about to change that. I have all the previous Setback records, including their 1995 demo, and you know what you’re gonna get with Setback, and it’s nice to see that this is still the case. That doesn’t mean they haven’t improved. On this full-length Setback has definitely stepped up their game and lived up to their motto ‘angry music for angry people’. They sound more pissed off than ever, and one of the main reasons for that to me are the vocals. Their old singer Bundy had a bit of a ‘barking’ style of singing, which wasn’t bad but to me was always the weakest part of Setback’s sound. They have a new singer on this record, and he has a deeper and rougher voice. It’s maybe not as distinct as Bundy’s vocals, but it fits the music to a tee in my opinion. Lyrically Setback doesn’t break any new ground, and it’s a mix of tried and true themes like standing up for what you believe in, backstabbing friends and failed relationships.

As I wrote earlier, this is Setback at its best, and this is their best record to date. Their songs are more varied than before, without deviating from their own sound. The new singer also gives them a new edge. And this album has the best sound of all Setback records by far. The production’s solid and in your face, and is also heavier than their previous ones, and especially the bass stands out in parts. Good stuff. Setback has stepped up their game for sure.