Sheer Terror – Standing up for falling down 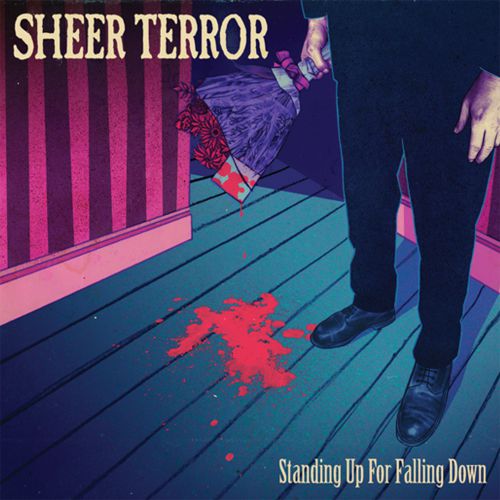 Twenty-four years after the release of the classic ‘Just can’t hate enough’ album ‘Standing up for falling down’ is finally here. That’s ten years after the final shows of the previous incarnation of the band. Since 2010 the notion of a new Sheer Terror with possibly a new album lingered in the back of many fans minds and the 2011 release of Spite blew a lot of them away. Some went away for good, always exclaiming that it will never be the same as with the debut album (you already got that one so listen to that and stop whining), and some could not wait for more new songs.

Spite was in all its rawness a very fast effort that contained two of the most pissed off songs from the band ever and a pretty decent cover song. Although the new album sounds much more ‘hardcore’ and even ‘punk’ the 7” was a good indication of this LP. To be honest, the previews I heard did nothing for me. I even stopped them half way because I did not get it at all. It sounded different and I couldn’t put my finger if I was excited to hear the whole thing or just distracted searching for whatever. It was confusing. This was something I waited for a long time and it sounded different than I expected but also familiar.

Then the first spin of ‘Standing up for falling down’ hit me like a well-aimed brick in the face. Everything fell into place. This was vintage Sheer Terror the way you never expected but also the most hardcore album in years. The songs are hard, brutal and to the point with all the sarcasm, melancholy and the cherished lyrics are brought with a ferocity that is dearly missed in a lot of bands. It is a faster, meaner and heavier band that still sounds more relevant that the ones they influenced over the years. And hell yeah, I know, a lot of people will tell me it was better in the past and it doesn’t sound like this or that. I do however remember that ‘Love songs for the unloved’ wasn’t considered a classic when it came out. Same goes for ‘Thanks fer nuthin’. You know what, when the band had their farewell tour the show I went to had about forty people that sang along very song and not the 4000 that say they were there. By the way, the Dutch national soccer team lost the match to Brazil that day in the semi-finals. And every time I see a match I can still hear Paul saying ‘You have been playing this fucking game for five long fucking hours and still lose’. How about that for a lousy fact.

Every album that Sheer Terror released is different. And this one is their most angry and pissed off one. Pauls voice has matured over the years and he knows what to do with it. People that expected more crooning will be surely disappointed. Spiritually the album resides between ‘Just can’t hate enough’ and ‘Thanks fer nuttin’. This is how hardcore was supposed to be. Say what you want and how you want it with songs to punch each other to rather than the tree hugging affairs we hear in a lot of other new bands. And it sounds far better than Hatebreed 28 that will tell you that you have to believe in yourself and the world is against you. Instead you get real life stories and rants against people that deserved the verbal beatdown. This is what made Sheer Terror special in dem olden days and this tradition is continued in songs that might sound blunt at first but offer a richer background. ‘I always pointed out your flaws and never cared for your cause’ rings truer than ever and makes this the album for the real outsiders. This album should be heard as a whole and not in samples or previews. This is an experience that will push every button in your head if you are a fan of hardcore or punk.

The sense of danger is back and it comes in eleven well written anthems that surely will entertain the growing army of Sheer Terror fans. The only hope I have is that people will put their money where their mouth is and buy the hardcore album of the year.