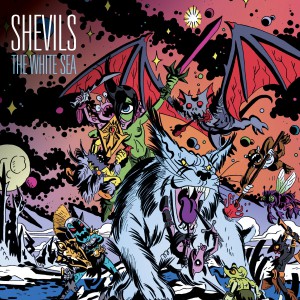 Shevils previous album, Lost in tartarus, came as a surprise to me. I picked that album up for review based on it’s cover and not so much for musical expectations. I liked the album so much I included it in 2013’s yearlist. A couple of weeks ago Shevils approached me, asking if I wanted to review their new album. That’s an easy question to answer, you’re looking at the result right now…

After repeated listening I decided I should definitely throw in a Soapbox-reference this time around. To stay away from the too obvious Refused comparison so to say. Looking back at the Lost in tartarsus review I saw that was not exactly a novel idea… What we learn from this is that the band has shifted sound a bit to the Refused school, as that was the first thing that popped into my mind when listening to The white sea. Lots have stayed the same. The attention to detail is, again, what separates Shevils from the competition. The band adds subtle synths to the mix, more than they did on Lost in tartarus. I’m not 100% sure I’m a big fan of this use of synths, but for now I’ll give ‘m the benefit of the doubt.

I wasn’t blown away by this album as I was by Lost in tartarus. This is mainly due to the fact that the quality of what’s delivered here doesn’t come as a surprise. The band is not threading new ground here. Fans of their older work will not be disappointed though.

Oh, the artwork is again to good to be true. Props for that!