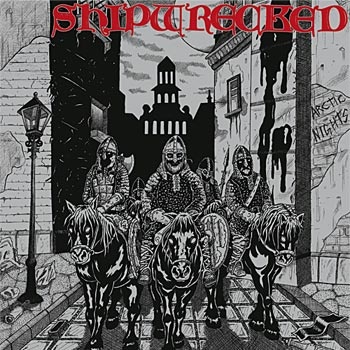 After years it’s finally there: the full length from Norway’s Shipwrecked. This band with current and ex-members of Onward, Common Cause and Insurance Risk have been hauled up in the cold, dark woods for a long time but the result is worth it. If Vikings were still conquering the world, they would have The Last Pagans as their soundtrack.

From the start of ‘Fast Violence Noise’ there’s no mistaking the sound of Shipwrecked. Here’s a band that plays the kind of early 80’s hardcore  known from bands like SSD, Negative Approach. Fast music with some links to British Oi and hardrock.

The lyric topics are a mixture of Norwegian legends and the more typical hardcore related topics about the scene and keeping true to yourself.

Shipwrecked aren’t inventing a new style within hardcore. Their music is as conservative as hardcore can get. Still it’s rather refreshing to hear a band that goes back to the roots of this scene and do it as well as these four last Pagans. People into Parkway Drive or Defeater will probably find this stuff way too simple and bad produced but in the end the guys in Shipwrecked will probably see that as a confirmation of the fact that they’ve come up with a truly great hardcore record.