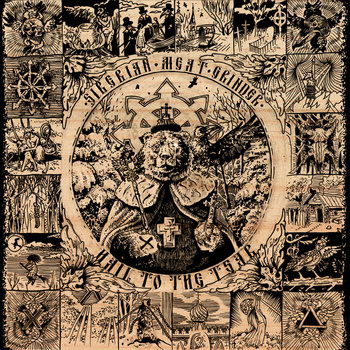 We all know that Russians are… a bit different. So is Siberian Meat Grinder, from the dark forests, praising the Bear Csar on their first release Hail To The Csar. Scott Vogel could be seen sporting a t-shirt from this band, which has a lot to do with them not just being pretty funny, but also pretty good.

As far as I’ve seen, genre is not a strict divide in many Eastern European countries and this band is an example of that. Hardcore and thrash blend in well together, but borrowing from stoner or black metal is no problem here either. What is most important to say is that these guys are hilarious, fun, intense and amazing. Think Municipal Waste (obviously), Iron Reagan and some DRI. Spice it all up with some Sheer Terrorand Cryptic Slaughter and we’re approaching the skate thrash of these boys.

‘Hail To The Tsar’ opens with some cryptic, dark sounds, but unleashes with a burst of guitarriffs, sharp like knives. Two vocalists, with some repetitive lyrics, bring a harmonious account of sonic violence. High speed with punkrock simplicity. A little more stadium sensibility and even some hiphop influences shine through on ‘Still in The Game’.

Slightly groovier guitar work, almost funky, can be heard on ‘Chainsaw In The Dark’. Though the vocals are pretty much in the same hardcore style, the music demonstrates skill and creativity. Lyrically, I suppose this band is not as overly political as either hiphop or hardcore from Russia, like Moscow Death Brigade or What We Feel. ‘Slay The Dragon’ demonstrates that pretty much, though underneath the fun and fantasy there might be a message hidden that I can’t decipher through it’s cultural sensibilities.

A slight wink to the Suicidal Tendencies can be felt on ‘Laughing In Your Face’, another track filled with diverse guitar work, which is very entertaining. If you don’t mind your music a bit silly and a bit more party like, then check out these guys. Unfortunately getting a CD is a bit hard, according to the band the Russian post is not too reliable, so just go for the bandcamp page.