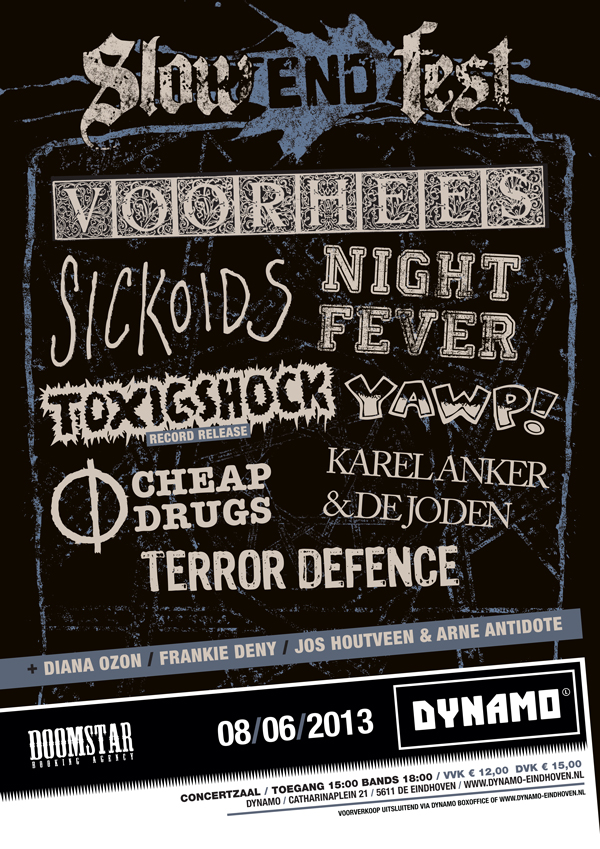 With a line-up including bands like Voorhees and Sickoids one could expect one hell of a good show. Especially when there’s also going to be a spoken word by Jos Seein Red. So was it the weather or just a general lack of interest that prevented people to come to this fest en masse?

One could speculate a lot about the not that great turn out. But I’d rather focus on what you’ve missed if you weren’t there.

I’d say the first highlight is the Dynamo in general, it’s a professionally run club without the attitude that some of these venues have. The ‘hey keep this place tidy and please be quiet we’re trying to be professional here’ kind of attitude.

Slow End Fest is more than music. This used to be common, like 10 years ago, and it’s good to see a part of it back in 2013. Besides the really entertaining spoken word by Jos Seein Red and Arne Antidote you could also get tattooed by Frankie Deny and Diana Ozon also made an appearance. How great is that.

As for the bands, they were all fast and loud. Voorhees absolutely killed it but Denmark’s Night Fever were the surprise of the evening. Sickoids was a band many people seemed to enjoy and Toxic Shock sure know how to put up a good show.

If there’s going to be another edition next year, you can count me in.

[UPDATE: Gallery has been lost while upgrading the site – sorry ]