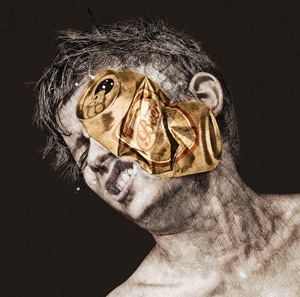 Sofy Major might sound unfamiliar to you, but the band exists for almost ten years now and this record is their third one. From the industrial wilderness of Clermont-Ferrand, France they treat the listener with nine vile ‘n rocking noiserock tracks. You might expect rough screaming vocals; instead you get sparkling dynamic singing in the vein of Big Business. Still not for the faint-hearted, the uplifting catchy vocal lines bring ‘Waste’ to a higher level.

The noiserock genre had its peak in the early nineties. It bit the dust afterwards and the last years made a comeback with bands like Fight Amp, Big Business and Ken Mode. With Dave Curran from Unsane (& Pigs) as producer and Andrew Schneider behind the mix table they have created a balanced record with nine songs (the last one is a cover of the French punkrock band Les Thugs). What I like about ‘Waste’ is the dynamic vibe and eagerness the band is playing. The fresh sound works out great in the dragging parts of “Black and Table” while next up “Iron Butt” is up-tempo, has awesome breaks and dissonant guitar parts.

Most noiserock has a monotonous and negative atmosphere all around; Sofy Major doesn’t go that way, the band brings an uplifting mood and is hinting towards alternative rock and punk. In “Devotion Man” the ghost of Helmet and Handsome is around. Before I forget, the bass sound is so tasteful I want to hear it live soon (the band will tour Europe in October and November).

Autumn is here; the French guys pay tribute with this record to late year’s sunshine and the colorful behavior of nature in these months. No wonder they added a cover song of a positive punkrock band. The melody and rage reminds of these in Sofy Major’s own songs. I only can congratulate this fairly unknown band with this great achievement. Curious? Listen to Waste.