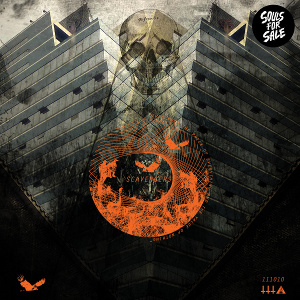 Sometimes you just have a lot of stuff to say to your listeners. Then the cover, the inside of the cover, the sleeve and the back can all be used to add bits of text, which makes the new album by Souls For Sale so intense. The title is Scavengers and its full of powerful hardcore with a tinge of metal.

The guys in Souls For Sale have been in various other bands and play hardcore, where it’s still spelled p-u-n-k (yes, stolen line). The guys from Bielefeld, Germany have been active in What Never Dies, From A Friend, Brighton Days, Marjorie and Getaway Drivers. Some metallic hardcore, but also poppunk.

After an intro that seems to predict a goth metal album more than anything, shit hits the fan on ‘Walking On Pain Street’. Slayer riffs are combined with the kind of vocals and sludgy sound you expect Crowbar to produce. That taste of thrash and speed metal can also be detected on ‘Scavengers In Suits’. On all the songs, also on ‘Fromselflootingtoanassaultdrivenapproachofbreakingfree’ (just mentioning it for the title, there’s a clear taste of metal in the air.

Pounding, topspeed hardcore with some soaring guitarwork is keeping the energy high on ‘The King Of Kong’, same goes for ‘The Circus Is In Town’. The video kinda tells enough about that song. ‘Zielenvisserij’ has something to do with singer Flo, who speaks some Dutch too (and designed all the artwork). The song continues in a very catchy rhythm with blurted vocals concerning religion spat out over the clean sounding song (there must be that poppunk influence of Brighton Days).

The fun days and stage antics of their All My Favorite Love Songs Are By Cannibal Corpse seem to be behind these guys. Relentless they continue with lyrics dealing with real issues in live, personal and the bigger stuff. The band reminds a bit of (old) Gallows on ‘The Libya Gundown Incident. There’s some Neurosis to be detected in songs like ‘Dead Men Tell No Tales’ and ‘ Acquainted Black’. A bit of dressed down Cult Of Luna on ‘Almeria’, this record has a lot going on and I would tell more but maybe you should just check it out. It’s going to be worth your time. Souls For Sale nailed it on this one.