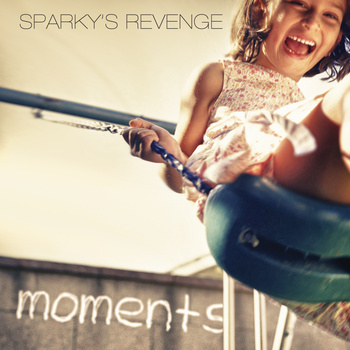 I’ve heard about Sparky’s Revenge from the Netherlands before, but aside from their name and the fact they played punk rock I was quite oblivious to the band. They didn’t make any impression on me whatsoever. That either means I just ignored them and should have been paying attention (I’m not ruling this out haha), or the new singer Waarde proved to be a great addition, because this new stuff sounds really great.

Moments has PUNK ROCK written all over it. From the bandname, to the summer themed artwork and the crazy mongoloid pictures of the band on the inside. So they nailed the looks, but how about the music itself? This kinda kinda punk rock needs two things if you ask me. It needs to be catchy and the singer should be good. Where in hardcore you can get away with an average singer most of the time, that doesn’t work in punk rock. The singer must be able to carry a tune. Luckily Sparky’s Revenge got this covered. Singer Waarde sounds great and the backings by Ilona (In Mentions) need a mention too.

These 5 songs were recorded at Double Impact, which resulted in a nice, tight sound, which works great for this kinda music. All in all it’s a classic soundtrack to the summer, if you’re into clichés like that. And if the upcoming summer will be as short as this one, these 14 minutes might just do, but I wouldn’t mind hearing more from this band.

Anyway, such a shame summer’s not exactly around the corner yet, because this EP will be in my car for sure.

Pick up the EP from the band itself.