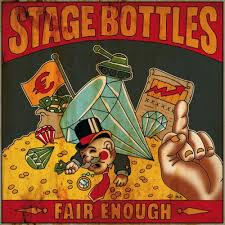 The Stage Bottles have been around for 20 years and still hold on to their wishes to change the world, even for a bit, on Fair Enough. The whole artwork of the Germans album has a certain vibe of “let’s set things right” and it feels nice to see this again. Not expressing personal pain and anguish, but talking about the shit that’s wrong in the world.

With an oldschool street punk sound, remniscent of the Angelic Upstarts, Cock Sparrer and early Dropkick Murphy’s (singer Olaf sounds a lot like Mike McColgan sometimes), the band has nostalgic vibe to it. Add to that the saxophone and you’ve got a pleasant sound.

The record opens with ‘Sometimes I’m Still Up For A Fight’, maybe a title that says something about a band that has been around for ages. The song sounds fun, catchy with an oldschool driven rhythm. Not too fast, not slow either, just comfortable. Same goes for the title track. There’s a lot of feeling to the songs.

There’s a bit of ‘Thubthumping’ in ‘You’ll Never Gonna Get Me Down’, which feels fun and frivolous. The band has no problem in sounding a bit funky or a bit sensitive, like they do on ‘Sailing Close To The Win’. We even get a saxophone solo on ‘Give Them A Chance’. This album might have that punkrock vibe, it’s a positive one all the way. These guys know they won’t be changing the world, but what’s wrong with trying?

Stage Bottles don’t pretend to do anything new or highly sensational, but they do make a nice album. It’s an enjoyable piece of music, the way it used to be and probably the way you sound if you get a bit more world-weary.