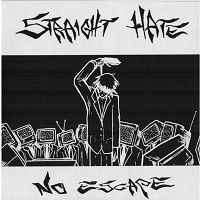 Straight Hate from Chemnitz, Germany have been working their way up the scene ever since 2004 and here’s their single with six songs titled ‘No Escape’. The cover doesn’t promise that much happiness with a man hanging himself. Combined with the grim writing and the further titles the negative vibe is very present.

The band plays gritty hardcore with a streetpunk feeling to it. It’s virtually impossible to find any information about this band, which makes me think of the likes of The Business meeting Slapshot in a dark alley somewhere in Chemnitz. Powerful, agressive and pulsating rhythms launch this attack on the ear from the start of ‘Tradition Of Killing’.

Some drumrolls kick of ‘I want it back’ and it’s immediate follow up ‘No Escape’, short bursts of energy are followed by sudden breaks in the music. Shouted, piercing vocals raging over the intense sound give away the energy of the band. However, nothing much surprising on this side of the record to be heard.

The fury that is displayed on ‘Drunken Fool’ seems genuine and convincing. The band does sound very real on these short, powerful songs. After less than 30 seconds the next song bursts in. ‘Shadows’ sounds old fashioned with simple, distorted guitar walls and relying more on anger than any technical skills. ‘Progress’ wraps up the release with some industrial sounding riffs opening, a Minor Threat-esque sound and shouting follows. I can’t say that Straight Hate managed to really persuade me to check more of them or consider them an interesting band. However, they sound real and angry and that makes it an enjoyable spin on your record player.