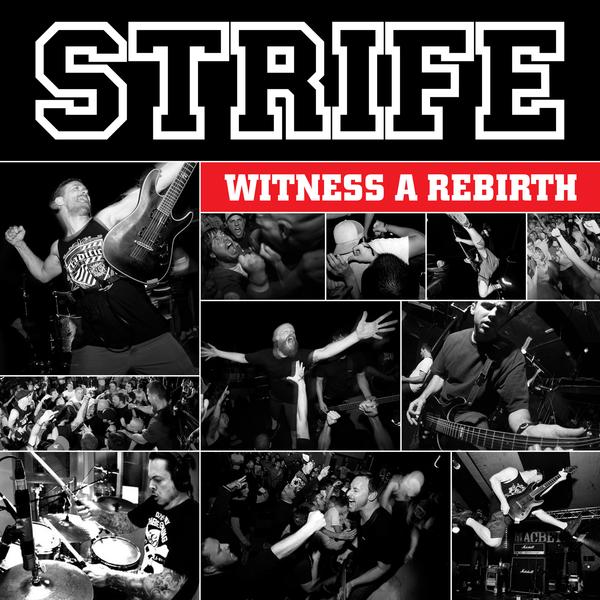 Just to get the negative’s out the way, the record is derivative and the lyrics are fucking terrible. Some bullet points:

Strife were my favourite hardcore band. When I was 16 I pretty much exclusively listened to stuff on Victory Records, and of all of Victory’s releases, In This Defiance was my favourite record (I would later come to my senses and favour For Those Who Were Crucified by All Out War). It was an utterly relentless 20 minutes of crunchy riffs, solid breakdowns, impeccable production. It was a well of youthful aggression and energy that was exactly what my 16 year old shao-lin rat tail sporting, shant wearing, X’d up forehead self wanted in its life. To this day, Strife at the Highbury Garage in London was one of the best hardcore shows I ever went to, even if Rick Rodney did ask me if I could score him some weed afterwards. So it comes to no surprise that I was somewhat troubled by the news that Strife were releasing a new album after 11 years, especially on a label as aususpicious as Holy Roar, whose roster is more a who’s that than a who’s who of hardcore.

Releasing a new record after a decade is always going to be a bit of a no-win situation. Do you re-invent your sound for the next decade, slow shit down, start wearing monks habits and get a 6 LP box set of practice sessions released on Southern Lord, take the gamble and risk ridicule? Or do you stick to the exact same sound as yesteryear in a bid for artistic integrity and run the risk of being stagnant? By and large, the hardcore community (notwithstanding the internet) is pretty open-minded when it comes to old bands dusting of their Les Pauls and trying to recapture something they put down when the real world came calling. I suppose the royalties from Godmoney were going to dry up at some point. Yep, hardcore tends to display retard-puppy-like tendancies when it comes to nostalgia, hence Agnostic Front and Sick Of It All churning out dull guff year on year. As long as you don’t come out rocking silk scarves and the glow sticks stay at home, lesser hardcore gods can do no wrong. Floorpunch could release a fucking Guns Up covers 7″ and at least 500 idiots would buy it on 3 different colours. It’s not like anyone’s looking at time signatures or chord structures. I’m not saying hardcore kids are easily pleased, but I am saying they’d eat shit if it was laid out in a varsity font.

Ok, ok, the record. So first things first, I got 10 seconds in and my burrow was frowned  The tuning is all wrong, it sounds like the fucking First Step or something. Oh I see, they’re saving the bottom end for ring outs and moshing. Nahhhh. Lyrics are pretty disposable, but I suppose as long as you’ve got something to shout into his ginger beard it’s all good (what’s up Frankie Boyle on steroids?). But really, the problem is apparent from the start. Literally from 10 seconds in. It doesn’t really sound like fucking strife. Yeah, Rodney’s kicking off, there’s some drop D bits, and those signature A string 5-4 fret bits that every strife song ever made has, but it sounds too clean, it sounds too much like a straight up hardcore band. (I’m sure someone out there will try ad quote the first xStrifex record flame still burns about now, but we all know it sucked.) The reason everyone my age liked Strife is because they were the hardcore band it was alright for metal kids to like. One Truth has this dreamlike foggy sort of production to it that just makes the whole thing sound like Turning Point covering fade to black by metallica. Then In This Defiance just sort of jumps out saying HIYA with this obscene crunch that grabs you by the balls and tickles your arsehole with its little finger. Even Angermeans is pretty fucking hard if you try and block out the flange pedal. Torn Apart is a pretty energetic number, I can imagine kids stage diving and flipping out and finger pointing to the Fisher Price singalong parts, but it lacks the brooding misery of songs like Lift or the baseball bat to the face of Blistered. This isn’t angry middle class Americans finding something to be cross about, this is bored late 30-somethings doing that really fucking patronizing happy-angry thing that older hardcore dudes exude with jarring ignorance. Things get better for a bit, songs like Carry the Torch and The Burden sound more like they should, the latter is a very close cousin actually of the aforementioned Blistered. But then Look Away comes on with it’s xFilesx derived fast nonce-sense as if they wrote the song for a 2005 comeback that never arrived, and it’s like a bucket of ice on my heavy-gram hardcore 7″ that now more resembles a flexi.

For the dullards of the internet, I’m sure Strife have scraped enough odds and sods into the record to pique interest, but in the same way that anyone that actually likes Metallica will only listen to the first 5 albums, you’ve really not got much excuse to give this more than a couple of spins unless you’ve just woken up from a 10 year coma. Witness a Rebirth is a hardcore record, there’s not really much more to say about it. I give as many fucks about the songs on this record by 40 year old men as I care about a new Rolling Stones record by 60 year old drug addicts. I saw Strife recently to a half-empty room, and they were blinding. But no-one in that room went to see them play new songs. Hopefully Witness a Rebirth will introduce a new generation of kids to one of my formative bands, and they may well see in a new era of torch bearing. But I think we’re just as likely to witness a stillbirth.