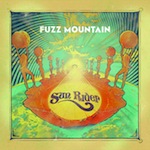 Ever been to Fuzz Mountain to enjoy the sights of the sun? Five men from the Netherlands have and without an insane backstory like Mind Control have recorded an impressive debut album loosely based around their namegiver the sun, under the moniker: Sun Rider.

The seven songs on Fuzz Mountain are targeted at maximum impact. Combining harsh vocals with smoother backings (think of Red Fang at times) and enormous groove, the band delivers variation in their blend of stoner rock. Overall, their guitar work is most impressive. I mean, who will not jump out of their chairs hearing a song like ‘Sun Worshipper’ for the first time? And while not all the songs have this effect, the band did manage to create a great Low Countries stoner sound all by themselves without a label behind them. It’s exciting to think what could come next because this rocks!