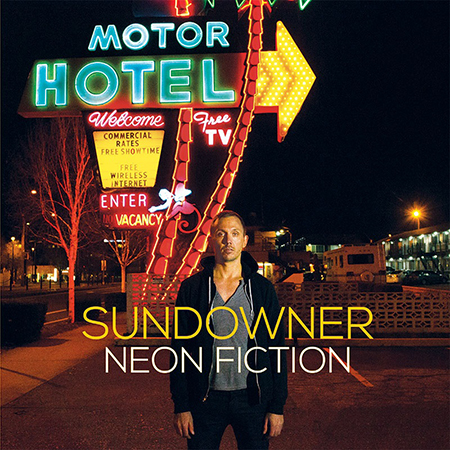 With a new release on Epitaph on it’s way and a performance at Groezrock 2014 will be the return of The Lawrence Arms. Before that however frontman Chris McCaughan releases Neon Fiction, the third album of his solo project Sundowner. Now I don’t know about you but I’m starting to be worn down by the huge amount of punksingers going solo.

Sundowner however stands out because of the different direction McCaughan has taken with his music. Not so much Americana but a more indie approach to pop is where McCaughan is heading. With Neon Fiction you don’t get images of men with beards hiking through a pine forest, it’s more the soundtrack of a lonely night in a shady motel.

Though I refer to Sundowner as a solo project, it’s probably fairer to treat this is a real band. McCaughan is more productive with Sundowner than with Lawrence Arms and there’s way more to the songs on Neon Fiction than just a guy with a guitar.

Neon Fiction is the first Sundowner release on Fat Wreck Chords and arguably not a record devotees of the punk label will immediately love. There’s no rocking out with a beer in your hand. Here are ten introspective songs for those cold winter nights. Jets To Brazil comes to mind which never is a bad thing.