Sundowning – Seizures of the World 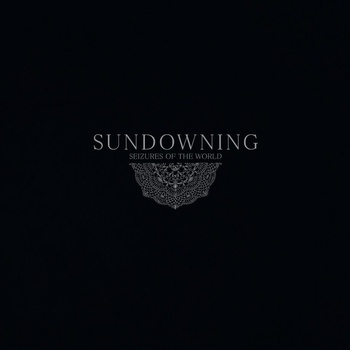 Upon hearing the name Sundowning, some people might think of a This is Hell album. According to the dark and blackened hardcore on this slab of vinyl I don’t think the boys from the German band Sundowning were inspired by this melodic hardcore band. The first time I saw them was actually on one of their first shows in the AZ of Mülheim together with Kodiak + N. To be honest, they didn’t sound inspired back then.

It’s great when, three years later, you hear again from a band to find out they have improved a lot in shaping their own style and creating well-structured songs. ‘Seizures of the World’ is a record you can compare with the creations of German bands like Planks or Omega Massif. Starting with feedback that increases in volume, “Heartless” explodes into aggression in the end. The screams in the final part show someone was really heartless towards the singer. I love this creative blend of darkness and aggression.

In the next song (the title song) he acts like a wild beast as well, which adds even more energy to this bursting slab of blackened hardcore. Smart as they are, they’re taking a step back in the melancholic ‘Shimmering’ that could have been a track of Cult of Luna during their ‘The Beyond’ period. This song ends in a heavy wall of sound with some dissonant guitar tunes in the background. The ride goes on and on with an occasional quiet moment like the beginning of “Thanatos”. It doesn’t take long though for the blackened heaviness to break loose again. Surprisingly, a nice banging groove pops up and together with the high guitar tunes this song is excellent. What Sundowning still has in common with a traditional hardcore band is that they keep their songs relatively short and compact (between 4 and 6 minutes) instead of playing 10 minute long boring songs.

The finale of this LP is the old restructured song “Salvations”. It’s a bit easier on the ears than the rest of the album and you can hear this is an older song, but it is a fitting ending of the album. People who can’t wait for the new Cult of Luna album or, just like me, can’t get enough of atmospheric and blackened (post) metal/hardcore should add this piece of vinyl to their cart. It’s pressed on 300 black and 200 clear ones.