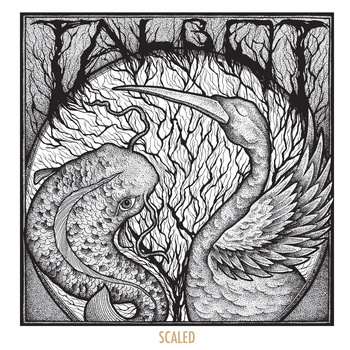 Pounding, heavy and enthralling sounds from the land of Estonia with the band Talbot. Though named after a french car brand, they travel the world in their blue Chevy. Atleast they used to, it was sold recently. This is their album Scaled, and it’s becoming the best one they’ve made this far. It did get them a slot on Roskilde already, though their first two albums were very interesting as well.

Anyways, you will not really expect it while listening to Talbot, but they really are just a two piece band. Magnus Andre plays the bass, synths and vocals, while Jarmo Nuutre does the drums and also vocals. This doesn’t lead to a minimalist funeral doom style sound, but a full-on massive sludge fest. If gletschers had soundtracks, it might be Talbot. Comparisons can be drawn with Black Cobra, Sleep and the likes. Clearly the doom sound has been influenced by the Seattle sound or even some Black Sabbath.

‘Spectral Express’ sounds a lot like its title, hammering, cosmic music like a train driving up the sky with some Mastodon epicness going on in the vocal department and atmosphere. There’s some kraut influences in ‘EgoMine’, which seems to spiral totally out of control with cascades of guitar sounds over a heavy, creeping bass. There’s definitely the vibe of some space rock going on in that song. ‘Delta’ has got what can be called a wall of sound going on, with a weaving pattern of the bass and high soaring vocals delivering an atmosphere like no other.

A little bit of funk gently opens up ‘Shadowbird’, while the guitar gently squeals. Playful rhythms and cookie monster vocals make up for another powerful song, with a lot of reverb. It lasts over twelve minutes. There’s something haunting about the title track ‘Scaled’, which slowly comes up like a rising sun. The song keeps teasing you and balancing on that moment of exploding, but it never does. The boys from Tallinn keep things tight though and never lose focus. That’s the tantalizing thing about this record, it sounds so simple but so well done and intelligent.

‘Hallelucinogen’ puts layers of sound on top of another, with epic vocals and a slow trudging walk like giants shuffling forward, the band approaches the end of what may be called a rather brilliant album. Talbot indeed sounds like being punched in the face by a mammoth, no lies there.