Tales From The Sick Zine #2 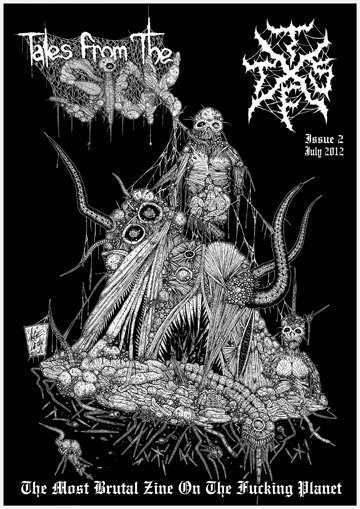 Well, where to start with this one haha. Let me be totally clear, this isn’t a zine I would normally pick up. I mean, “The most brutal zine on the fucking planet”. That’s not getting me really excited to start reading. But this zine is done by Reinier (mental on SWNK) and he’s cool (slightly retarded, but cool haha) so I picked this up. To support him. And I was quite curious to see what he came up with. Because you never know with him.

The first thing you see when you open the zine is a naked girl sitting on a copier and pictures of Reinier calling himself The Goreaholic and the guy who he does the zine with who calls himself Sly The Goregnome. For real, “Sly the Goregnome”. I gotta come up with an awesome nickname too. Oh and it states that the zine is “Mutha Fucking 100% D.I.Y!”.

The first interview is with Ed from Goodlife Recordings and once again has naked girls in the background haha. Let’s just say this zine is not going to get rave reviews by the political correct crowd. Next up is an interview with a metal band. I think they’re called “Epicardiectomy” but I’m not sure. Metal logo’s and I will never be friends. Some cool quotes from this interview “When did you gorehoundz got in cuntact with death fucking metal?”, “What is the secret from your vokillist behind the guttural madness?”, “Last wordz are yours, make it fukking sick!!”. No naked ladies in the background though for this one…

I think you kinda get the idea how the rest of the zine is right? I like the fact they’re not only interviewing bands, but also feature artists (as in people who draw stuff) and lay-out wise it’s nothing amazing, but not that bad either (I’ve seen much worse!). (Hardcore) bands featured (among others) are: Six Ft. Ditch, Sicker Than Most, Spider Crew, No Holds Barred, No Second Chance and more. Decent lengths too, mostly 2 or 3 pages.

The bands are not really my cup of tea and it’s all a little too over the top for me haha, but still… I can’t deny that I actually had fun going through this zine. So what to make of this? If you’re into death (FUCKING!) metal or BRUTAL (fucking) BEATDOWN, and not that politically correct you probably love this zine. Everyone else: probably not so much.

PICK UP A COPY