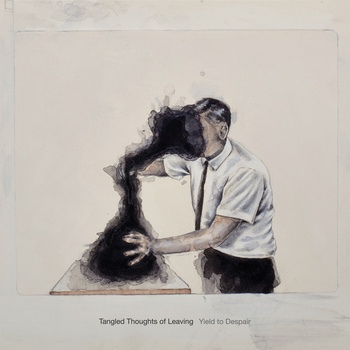 Tangled Thoughts of Leaving from Perth, Australia is already well known in their country however not yet discovered by many in Europe. Pelagic Records did though and they are releasing the second album ‘Yield to Despair’ on the European market. Without any idea what to expect I started listening to the 70 minutes record.

Still after several sessions I am speechless and can’t find the words how to describe this brilliant instrumental album. There is not a genre where they fit in nor can I find bands comparable to them. Every word I write will not completely justify the record. I’m just not worthy, but let’s give it a try after the five songs movie has passed by without recognizing time and space.

Most parts of the album are having superb dramatic piano and synth lines all over while the jazzy drums finding its way like a river towards the sea. Still these instruments are clashing heavily with the guitar and drum parts. That seems like a short standing marriage however the four guys are combining it with punctuality of a chip machine that’s unstoppable. The lengthy songs find their eruption in layers of noise while the jazzy drums are still in heavy rotation such as in “Downbeat”.

There is happening such a lot in the songs I cannot describe everything. Fact is these guys are technically very skilled, never they have forgotten where it all is about in music: song writing and venting your emotions via your instrument into enervating songs. The quartet dares to experiment and adds multiple layers of drama in their pulsating music. I only can find one band that shares the same approach and that’s Kayo Dot however both bands create totally different musical landscapes.

The instrumental band did two small tours in Europe in 2013 and 2015; if those shows were as impressive as this album it must open doors for a bigger audience. So stop reading this review and push the play button below and you shall beg for more ‘Yield to Despair’.