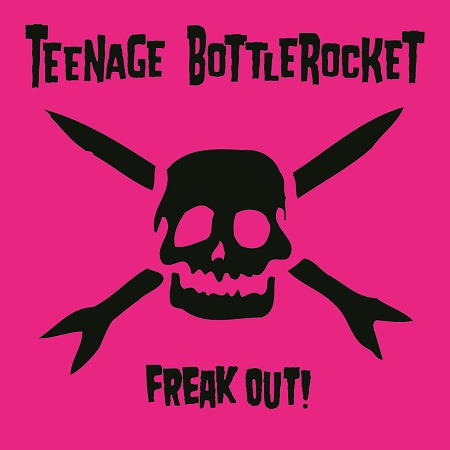 By now, we all know what to expect from a new Teenage Bottlerocket record, right? For five full length albums these guys have been fine tuning their Ramones 2.0 sound, so there’s always going to be some debate about their best effort so far. Warning Device is my personal favorite, probably because that’s the album that got me into this band in the first place, but I know a lot of people prefer Total. So will Freak Out! make it to the top of anyone’s list?

First off, Freak Out! sounds deceidedly more aggressive than it’s predecessors, especially in the first few songs. The guitar sound and drum sound is heavier (within the poppunk specturm) and the songs sound more rowdy. For instance, the boisterous lead riff in the chorus of anthemic banger Cruising for Chicks could easily have been on an earlier Danko Jones album. The second half of the record finds the band in more friendlier waters and to be honest…these are not the stronger songs in my honest opinion, because they sound a bit too familliar at times. Still very good, but maybe a little easy. They also considerably toned down the ‘Woh-oh-oh-ohoh-oh-ooooh’s this time, which make some songs less instantly catchy than previous work.

As always, the band covers the more important and serious topics in life, like the danger’s of heavy metal head banging, evil comicbooks, Topgun references, terrifying squats, the virtues of hard moshing, subdom lovestories, avenging the death of a kung fu master and of course that greatest staple of all things pop punk, teenage heartbreak. On every Teenage Bottlerocket album there are a couple of fillers and opinions will probably differ on what songs are below par. I personally could have done without the last two tracks, Summertime and Go With The Flow, because they are easily the weakest on this album and the fade-out that concludes Radical would have been a perfect ending. That song shows the band at their sharpest lyricly as well, with a brilliant line like “Remember when you told me that you’d stay with me forever? I will never forget those couple of days…”

All in all this album gives us more of the good old quality same with a few pleasent surprises, so there is no reason for TB fans to freak out (see what I did there?).