Templeton Pek – Slow Down For Nothing 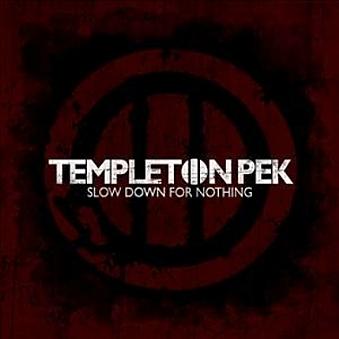 Slow Down For Nothing features one song with strings and two ‘anthems’ according to the press sheet.

Maybe I’m being unfair here but if you go into the studio with producer Greg Haver (Manic Street Preachers/Lost Prophets/Bullet For My Valentine) you’re aiming for more than playing in squats and opening up for Antillectual. Ambition is a good thing, who likes slackers? But if ambition makes you sound like Rise Against without the political lyrics and you’re press photos have much in common with photo shoots of N’Sync I don’t know if I’m all that enthused about what you’re doing.

This whole EP makes me wonder what the guys of Rise Against thought when Templeton Pek opened up for them on tour. Was it ‘Hey, those guys are covering Rise Against songs I didn’t know we made’ or ‘Hey, they play catchy tunes and their management offered a lot of money to have them play. So let’s sit it out’.

Personally I like my music sounding less good but made with more integrity and passion.