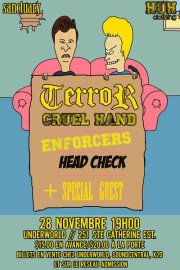 We’re not only going to do record reviews. We might throw a zine review in there, or a show review… Like this one, done by the newest addition to our team, Karl.

Yo what’s up everyone. there was a pretty ill gig monday, here’s a quick review.

We got to the venue around 7:30 just in time for the first band, No Pretension. They just started playing and already have a demo out. People were really stoked on their set, there was a lot of them moshing and stage diving which is a rare occurence when the first band plays. But it was really cool, check em out.

Head Check played after. I guess they’re down to only one guitar player now. They have new songs and they sound real cool, I’m already looking forward to hear them recorded. They’re all a bunch of young guys that are enthusiastic about hardcore which seems rare these days. They’re on the up, so again, check em out.

Enforcers got up on stage and as soon as they started playing it got wild. They’re probably my favorite MTL band right now. Their record, “End Of Time” just came out on A389 Recordings and it’s a BANGER! Anyway their set was really tight, people seem to know even the new songs. And the demo cuts are always a hit. Also wanted to mention their demo tape will be repressed as a 7″ on Save My Soul/Blank Stare records. You can find em on Facebook.

Cruel Hand was up next, and as per usual they brought it. One of their guitar players got denied from entering Canada because of a DUI from some years back so they were gigging as a 4-piece but it still sounded cool as shit. People were singing along and moshing. I def got into the pit for “Under The Ice”. It’s cool to see them keep doing their thing.

Then finally TERROR bum rushed the spot. From beginning to end it was constant pitting and diving. Great setlist, perfect mix between old and new. They only played 12 songs but I’m sure they’ll be back soon. I don’t have much to say except it was fun.

After that a bunch of us were just hanging outside, bullshitting and all that. It was a good way to spend a monday night, no doubt. SEE YA!