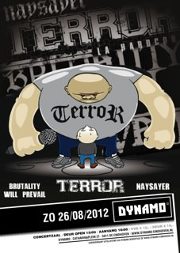 On a peaceful Dutch sunday afternoon I traveled down to picturesque Eindhoven to witness a not-so-peaceful hardcoreshow; Terror + supports tearing it up at Dynamo. I got among the enormous group of black shirts and stretched ears and this is my report of that afternoon.

Dresden, Germany’s Risk It! got the hard task to open for this stacked line-up. Risk It! is a fairly new band that plays NYHC in the vein of bands like Madball, Fire & Ice and Cruel Hand. Everything was there; the fast parts with Cappo-like screams, the two step-parts, the mosh parts and still they didn’t manage to impress me. Don’t get me wrong, Risk It! gave their everything, energy is not what I was missing. I just missed something extra, maybe a Leeway-esque solo or something. It just was a bit dime a dozen for me. Maybe I was just put off by the mysterious smoke effects during the set. Luckily lots of others were going off, something that you don’t see happening at openers very often. I suggest you check them out, they do have some potential, at least according to shout-outs by Naysayer and Terror.

Next up was Wales’ heaviest aka Brutality Will Prevail, the flagship of Purgatory Records (which is operated by singer xAjayx, of course). BWP bring a heavy mix of metallic hardcore, stoner-like sludge and classic NYHC, a combination that works out surprisingly well. BWP played 30 minutes of drop-tuned destruction while a well-filled room was going nuts, a frightening/pleasing sight so see, to say the least. I thought BWP’s sound worked out really well with this line-up, they managed to keep things interesting without losing any intensity. I also loved the slowed down instrumental parts, great stuff there. Luckily BWP got a great crowd response, a thing I love to see. These Welsh blokes are band that you should keep on your radar, their new LP is coming out on november 12th (I believe), pick that stuff up.

Richmond, Virginia’s finest, Naysayer, were the last band to hit the stage before Terror did. Naysayer are a Reaper Records band, and you can definitely hear that: Their sound is NYHC-like, heavy and mosh-able, a great support for Terror, you’d say. I was quite surprised by the low attendance when Naysayer started playing, not even half the room was filled. Luckily this changed after a few songs when more people were dragged to that basement by the heavy grooves and two-step parts. Naysayer played a tight and strong set, showcasing songs from older and newer efforts. Some highlights were guest vocals by DavidxWood (Down To Nothing, Terror) and good old “scene-speech”. Good set, good band.

Defending their legacy and reputation as one of the longest running and most entertaining bands in hardcore, Terror was the next band to play. From the first note played everyone in the full room was moving, non-stop moshing and stagediving for almost the entire set. Terror played their biggest songs back to back with deadly precision, not a mistake could be spotted in the 45 minutes they were on the stage. The vibe was good, the songs were good. You could say that this was a perfect set, songs off KOTF with songs off LOTL and Always The Hard Way, stagedives (lots of faceplants too, which isn’t great of course) and to top it off some guest vocals and mic steals of some Dutch hardcore veterans. Scott Vogel was already speaking out his love for the bands No Turning Back and Born From Pain and his content with the attendance of some of the members of those bands. I believe I’ve seen (ex-)members of BFP, NTB, Naysayer and probably some other bands take the mic and deliver some lines, a great thing to see. Another important moment to me was a speech Vogel did mid set, he pointed out that many people of his age were stuck in the past and said hardcore is dead and that many new kids don’t know a thing about the roots. Listen to the wise Scott Vogel; pick up a new hardcore LP(“Trapped Under Ice, Take Offense & Backtrack”) but explore and keep in touch with the roots(“Judge, Chain of Strength”). I’ll just leave it at that, it really can’t get any better. Good show, great moments. Keep The Faith.