The Alligators – Time’s Up Your Dead 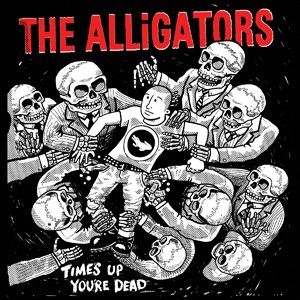 Next to being the label behind some of the bigger new hardcore bands like Defeater and Cruel Hand, Bridge 9 occasionly re-releases some old stuff like Underdog, Agnostic Front and Antidote. Though The Alligators isn’t a band from the 80’s they sure sound as one.

The Alligators is basically Roger ‘Agnostic Front’  Miret doing a band with some Insted guys.Times Up You’re Dead is a compilation of songs The Alligators previously released on 7″ on Indecision Records plus a Negative Approach cover and some previously unreleased songs. The songs deal with a fucked up United States, global warming and camera-security.

If you like Victim in Pain -era Agnostic Front, The Alligators are a band you’ll love. Personally I think Miret is sounding better on this record than on the latest AF records. Yet it’s nowhere close to being as good as Insted.