The Arrogant Bastards – Back To Myself 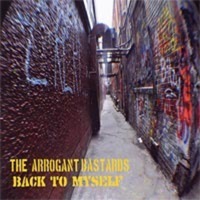 From Inkster, Michican comes the band named The Arrogant Bastards, and they are inspired by everything you can name that is punk from the nineties. They released a little album called Back To Myself  and I had the fun of listening to it. The band would like to point out that it’s available for free, so check them out, whatever I have to say about them, and hear for yourself.

These guys sound like a mix of that nineties sound of NOFX and Face To Face, but with the simplemindedness of early Oi! bands. That is not a bad thing since it really brings the sound of these three guys, who work very hard for their band, back to the bare primitive sound that punkrock can have and should have at times.

Songs like ‘Stroh’s Song’ and ‘D.R.P’ sound pretty typical with the driven buzzsaw sound and lyrics that deal with the average angry utterance punkrock contains. ‘I.D.C.’ has a bit more of an interesting sound that could be a Descendents song with the repetitive lyrics and simple, but intense message. ‘Bestfriends’ is the song that should have been scrapped from the album in my opinion. Apart from it being a bit too soppy, it also sounds rather childish and badly done. Apparently all three bandmembers of The Arrogant Bastards do vocals, but none of them really have the right voice for it.

The album is not anything innovative and you can clearly point out where the sound comes from on every song. ‘Second Chance’ for example, reminds a bit of bands like Osker with the close to spoken word vocals. It’s a stroll down memory lane, but also a fun album. The only thing that bugs me is the vocals. They are just not melodic enough or just not rough enough. That’s why a song like ‘Alcatraz’, another punkrock ballad, just doesn’t work.