The Bouncing Souls + Every Time I Die + Colors Dead Bleed @013 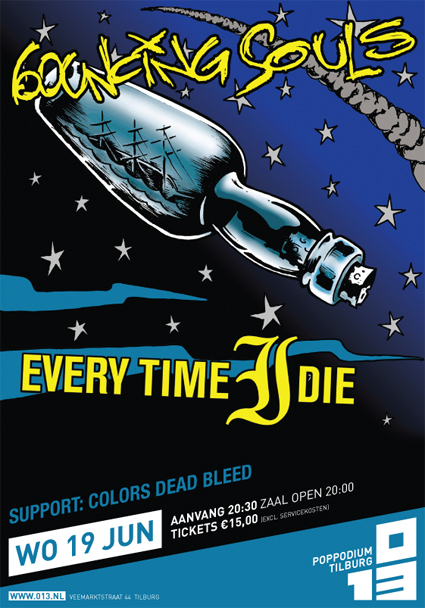 Apparently a show with both The Bouncing Souls and  Every Time I Die is a guarantee for lots of sweat, a bit of blood and some tears…

The Bouncing Souls and Every Time I Die together on one tour. Though stranger things have happened, it’s not a combination I would have come up with. Yet it seemed to work because where I think on their own these bands wouldn’t be able to fill the midsize stage of the 013, the turnout for this show was actually pretty good because of the mixed audience.

Colors Dead Bleed is as mixed as a band as the audience was. Part Belgian and part Dutch and with some scene veterans like Polle (The Butcher) nothing stands in the way of playing a very tight set. All these guys have been in numerous bands before and they clearly know the drill. Their mix of Rise Against-ish punkrock with some post hardcore elements quite surprised me.

The weather conditions in Tilburg were ideal for Every Time I Die to set the place on fire. The day started out with some thunder and then the whole day became hotter and hotter. The kind of weather I think of when I see movies about hot, sweaty summers in the southern part of the United States and fitting with the southern rock elements of Every Time I Die. Half the crowd really came to see and hear this band and both audiences as band tried to give it all. Because of the heat things didn’t get all too hectic. ETID played a nice combination of older and newer songs with some real crowd favorites. I’m not under the impression however that they won anyone over from The Bouncing Souls camp.

I’m not going to put a number on the amount of times I’ve seen The Bouncing Souls by now. Some shows were awesome and some pretty much sucked. This show is somewhere in between. I’m not particularly impressed by their latest record Comet and was glad they only played a couple of songs from that one like the Springsteen-esque ‘Coin Toss Girl’ and Misfits influenced ‘Infidels’. The band knows as well as any fan that How I Spent My Summer Vacation and Anchors Aweigh are the records to play from. So there were a lot of songs from both records like True Believers and Kids and Heroes. There was some pit action, people screamed along, everyone was sweaty and not all stage dives went as they should. After this show I can add another scar on the left side of my back as well as a knee that feels locked, to the list of show injuries. Auch.

Can’t wait to see Hot Water Music coming over with Converge, Nails with Lagwagon and Defeater with Rancid 😉