The Bruiseheads – The Unstoppable Force 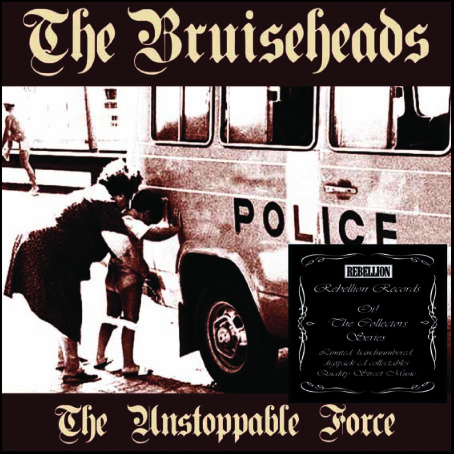 The second review of the limited Rebellion Oi! Classics series is strictly limited to 200 copies. So be sure to get your copy fast.

You know which cliché I hate? When someone tells you a young artist has an old soul. Especially when you hear a lot of tricks. Now how this vocalist sounds like a 40 year old geezer that drank a few whiskeys and smoked a few packs of cigarettes is beyond me. His voice sounds a lot rawer than you expect from a young guy around the age of 22. More surprising I hear no tricks at all. The Bruiseheads come from Breda and Tilburg. Situated in the south of the Netherlands. Now Breda isn’t my city. Tilburg is. It is an ugly city but it bursts with life. It has this raw and depressing area’s where you wonder how people could live there. Somehow you always hear that in the music. I didn’t expect a band like this from that area because most bands I know of are making metal in every niche you can find and some excellent hardcore and punkbands that sound just a tad different from the rest of the Dutch scene. So if you hear a band like this it’s really a surprise.

What I love about this release is the direct approach. Simply write an anthem and support it with harsh but honest lyrics with a take it or leave it attitude. Because of the gritty vocals you believe every word they say and they know what they talk about. And let’s be honest, even though you clearly hear that they listened to a lot of classic bands that paved the way for these guys, the breath of fresh air and youthful enthusiasm are more than welcome. The songs sound a bit faster than your average Oi! outfit and had a militant feel to it that I only hear in a band like Slapshot (hey, like I said before, I am not the biggest Oi! fan in the world so you have to do with some lame hardcore or punk references). This determination and urge makes it that I want to hear more from these guys. And though I like the demo songs I really have to say that after the well-produced part of this album they sound so much tamer than they would have as a separate release. On the other hand they give you a sign that this band grew into a menacing beast in no time.