The Crytearions – I See What It Is And I Am Scared 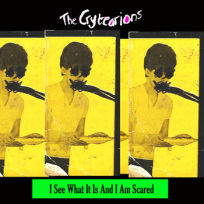 From Mayo, Ireland, comes this record of The Cryearions, a lofi project essentially featuring one bandmember, that being Jimmy Monaghan. The recording studio for I See What It Is And I Am Scared was his bedroom. Apparently that’s enough of a studio for this guy.

So what you get is a wonky, wacky lo-fi record with a lot of fun to it. The sound is fuzzy, highly distorted and crappy really, but in a way that makes it sound like all those bands like Night Beats who get this worked up in the studio. There’s a bit of Wavves in there, but not the bad things if you know what I mean. There’s a certain portion of anger and drama to it, it’s great.

‘A New College Suburbia’ might make you immediately check if your music playing equipment has a defect (it sounds like its skipping). Barfing sounds of almost bursting speakers indicate the rhythm for ‘I Can’t Believe What You Are’, which is mainly rhythm and melodic vocals, merged in a quirky, slightly unpleasant song. Overly distorted, hammering guitars are overly present on this record by the way. It’s also nice that the explicit lyrics have been indicated on the back of the album, like the funky cowboy song ‘Gross Situation’, which has a bit of a foreboding groove to it.

The songs have a certain upbeat quality, the vocals are a bit Jello Biafra in his bathroom with the bloke from the Editors. The mix is totally unbalanced, which is just how it is on ‘Early Retirement Plan’. The title track is one big wave of distorted, prolonged guitar swoops, interrupted by a vaguely familiar riff from some pop song. I can go into every song like that, simple, sunny and fun all in all. ‘Permanent Vacancy’ is a bit more coherent, where ‘Masses’ is just a racket with shouts. You can either hear early Pink Floyd or early Nirvana in this record. It has a rough brilliance that should be checked out.

Oh, and Jimmy send me an awesome handwritten letter along. I’m considering writing back because it was so cool.