The Decline – Are You Gonna Eat That? 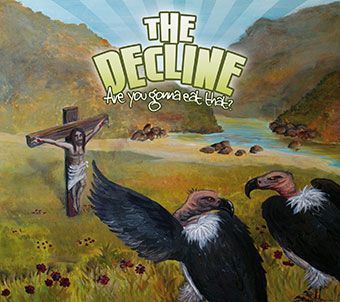 I see this band has a ‘Nate Dawg’ in their ranks. UK hardcore anoraks may recall a UK band called The Decline that were around for 37 seconds in 2003 and also had a similarly named member. Anyhow, this ‘The Decline’ are Bad Religion style pop punk from Perth, Australia, who also give more than a casual nod to the frantic pace and immaculate songwriting of Lagwagon. As you’d expect then, they crank out the perfect soundtrack for a summer spent skateboarding and hanging out in the sun.

Twelve hook ridden pop punk anthems reside on this CD, some smooth and slick, some fidgety and erratic, all of them solid. ‘Shit Yeah’ is my particular favorite. What is also encouraging is that despite the boundless youthful energy captured in these tracks, the inlay card depicts a band that look completely fucking knackered and in the throes of some serious sleep depravation, quite possibly so that they could bring you this CD in the first place.