The Dicks – These People 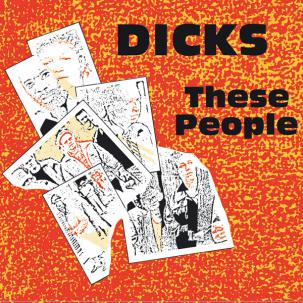 Alternative Tentacles thought it was time to re-release The Dicks 1985’s record These People. Don’t ask me why though.

The Dicks were one of the early eighties hardcore bands from Texas and had a notorious frontman in Gary Floyd:

A guy dressed up like a nurse with chocolate frosting in his pants singing about Communism, that’s weird.

That’s what Floyd himself says in Steven Blush’s American Hardcore.

The Dicks released their debut lp Kill From The Heart in 1983 on SST Records. A year later Floyd moved from Texas to San Francisco and got himself a new line-up with whom he recorded These People.

But no one seemed to give a shit.

According to Steven Blush that is. Well apparently there are still some people who like this record enough to get it re-released and remastered by Jello Biafra.

These People isn’t your typical early eighties hardcore record. Floyd can actually sing and the music is a lot slower than most bands of that era. It’s some kind of  experimental blues-rock with nods to hardcore here and there. It’s not bad but it’s not the best music to come out of the hardcore scene back then.

The best songs on this re-release are the bonus tracks taken from 1984’s Peace EP. These tracks show The Dicks more angry, catchy and ferocious.

Alternative Tentacles also re-released Kill From The Heart and I personally suggest that’s where you should start collecting The Dicks. These People is nice if you want to have a complete collection.