The Gaslight Anthem – the B-sides 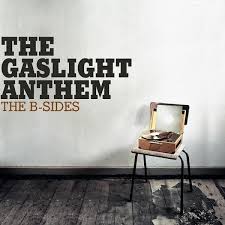 Sure it’s fun I can write a review of my once favorite band. Sure was cooler when I could do this in a time we’re they didn’t slip away from my indeed favorite band to a standard decent rock band. Still my longing for a refreshing or even a ‘back to the first albums’ kind of tune is bigger than my further unchaining love for these guys.

When ‘She Loves You’ starts I lift a bit of excitement cause I hear a, for me, new song in the fantastic atmosphere and production of the ’59 Sound era. When the Gaslight Anthem write a good song it can be, for a fan, satisfying enough like a full-length (let us remember a Blue Jeans & White T-shirts). And that is exactly what I think off when I hear ‘She Loves You’ for the first time. A journey back through time, right to those moments in small venues singing along, with maybe a small hundred, to those instant anthems.

Then the actual ’59 sound comes through, but acoustic. This one sounds like it’s actually done fast for the B-sides thing, with a bottom low at the break which does not correspond with the rest of the song. Not too speak of the passion which can’t be heard anywhere which was one of the main things of that song. Further on the record we meet with another hit from the ’59 era, Great Expectations, which has the same points lost but also lacks speed which is crucial for the song. After the acoustic ’59 we ramble through a live version of ‘State of Love and Trust’. I am not that big of a Pearl Jam fan and let’s just say this does not help at all.

After four songs, again an acoustic version of a Gaslight track. The Queen of Lower Chelsea is one of my favorite songs of the ‘later’ Gaslight, and the acoustic version sounds good. Although the flat sound Fallon sings with sincerity, which is a Fallon at his best. Later on the band, or maybe Brian Fallon, stays on this good level, Songs for Teenagers and especially Antonia Jane are two good covers.

At the conclusion of this B-sides we have to swallow one more, Boxer. The rhythm is totally ruined by a strumming guitar, which is not the problem, but the combination with the weird clinging beat sure is.  At the very end we can ride home with an actual Robert Bradley Blackwater Surprise cover, which is again a quite nice cover and reaches the ‘Gaslight level’.

It has some lows which are characteristic to the road the band has been taken. But there are also some more than decent songs. I would sign for a cover album. Because if you leave out the acoustic own songs , this is a nice record. And if so, do please add-on those Kelly Clarkson, Springsteen and Katy Perry covers. And somewhere in this world there is a Gaslight Anthem version of Dylan’s Changing of the Guards which is really good and at this point only listenable on a CD where you have to sit through Miley Cyrus first, weirdly enough.

This may look like a cruel review, but don’t get me wrong, for a B-sides album, it’s an O.K. record. A few songs on this record in combination with ‘the Horrible Crowes’ and the latest internet videos of ‘Molly and the Zombies’ gives hope for better Gaslight days.