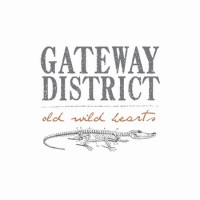 You might have an Punk and New Wave compilation lying around somewhere. The kind released in the 90’s by a label like EMI who wanted to cash in on the new punk hype fronted by The Offspring and Green Day. So the major label went throught their archives and usually compiled a two or three disc album with the likes of The Ramones, Killing Joke, The Buzzcocks, The Pretenders etc. I have one of these boxes and they’re ideal material for long drives. Besides the aforementioned bigger names in 80’s punk the discs are usually filled with not that great bands. They’re kind of punk’s version of elevator music.

If I were in The Gateway District, some sort of punk-supergroup with members of The Soviettes, Dear Landlord and Banner Pilot, the least I would want is my music to be compared with elevator music. But it is what it is. I’ve tried to listen to Old Wild Hearts from start to finish and I just couldn’t do it. It’s like listening to one of those forgotten 80’s punk bands. But not one song, no a whole album.

I’m not one those people, who I know, who cringe every time they hear a female singer, but the singing on this record is really too much. Someone is trying too hard to be the next Joan Jett or something. Musically there’s also nothing to write home about. It’s mediocre, melodic pop-punk. However if I put my iPod on shuffle and a Gateway Song comes along, I don’t feel the need to skip. It’s kind of a break from the more intense stuff I’m listening to. It’s elevator music.