The Locust – Molecular Genetics From The Gold Standard Labs 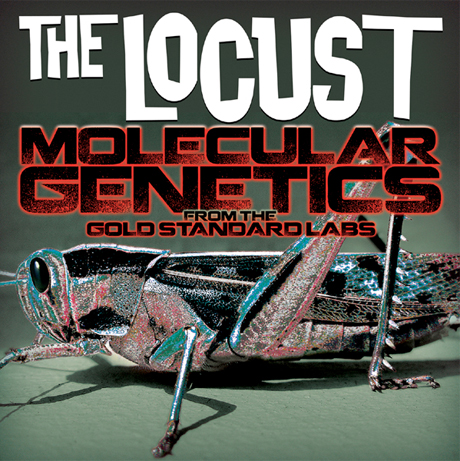 “Hey dude, wanna go see that band playing in the batcave?” An unwittingly given answer led to me being confronted with one of the most intense bands up to date, years ago in Tilburg. The Locust is musical fury and insanity that knows no equal. This CD contains an anthology of their work ranging from their self titled EP and album  in 1997 and 1999 up to their releases in 2002, leaving out their 2005 album and early splits as a powerviolence band. The material is hard to find anywhere else so why not release 44 tracks of that stuff they must have thought at ANTI records. Not a bad plan at all I’d say.

“I wanted to change the way people perceive music, or maybe just destroy it in general.” This generally describes the attitude of the band as expressed by bass player Justin Pearson, who also played in The Blood Brothers and Some Girls. Insane bursts of powerviolence are followed by crazy synths within the stretch of a minute. ‘Flight of the Wounded Locust’ probably has most to offer for those interested in hearing this band do their thing. Dressed in what looks like a blend between locust and uniform, the band certainly displays a healthy sense of humor in their songtitles with ‘Get Off the Cross, The Wood Is Needed’ or ‘How To Build a Pessimistic Lie Detector’.

With band members hailing from bands like Cattle Decapitation, One Day As A Lion, Yeah Yeah Yeahs and Head Wound City it is hardly surprising that this band seeks all sorts of extremes. Grindcore mixes with mad synths easily and comparisons are hard to draw. Their work as displayed on this record shows a cohesive whole. Only the very last bit bit confronts the listener with the hardcore roots of the band. Their early work on the self-titled EP clearly displays that, particularly ‘#99’ and ‘Ass Gravity’ have the typical blasting grindcore sound that seems to balance on the edge of sheer chaos, prodded in its back with the screaming high pitched vocals of, well most of the band members.

It’s hard to compare these guys to any band they aren’t playing in themselves (which are never as ambitious and musically adventurous as this project). One could name some grindcore bands, but none show the musical charm and ‘out there’ mentality The Locust has. The men from San Diego are the Fantomas of extreme music, Enter Shikari mutated and mutilated into a bloodthirsty beast, but they were and still are astonishing and amazing and this record is definitely a great way to get into this group. For the fans it’s a good way of completing your collection. For those who feel ambiguous towards it, this is the blow to your eardrums you’ll never forget.