The Menzingers – On The Impossible Past 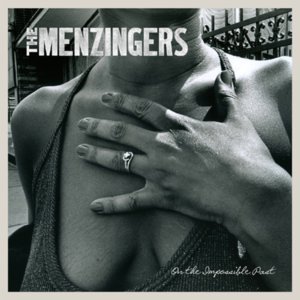 Are The Menzingers ready for the next big step or was Chamberlain Waits the best record the band had in them? Questions which On The Impossible Past, their Epitaph debut , answers with YES and NO! Yes, the band sure made another big step incorporating more alternative rock in their punk and No, Chamberlain Waits was only the bridge between great and greatness.

From the get go of ‘Good Things’  On The Impossible Past is 100 percent Menzingers, only with better vocals, more memorable melodies and lyrics everyone will be singing back and forth this year. Where Dead To Me never again reached the level of Little Brother, The Menzingers just keep on writing better and better records. Maybe the fact this band doesn’t change members every month does pay off.

On The Impossible Past isn’t all gold and glory though. The slower paced ‘Ava House’ is the weakest link on the record. It’s slow pace is kind of reminiscent of Gaslight Anthem songs like ‘We Did It When We Were Young’ but where that track actually builds up to a certain point, ‘Ava House’ keeps going in that same slow pace.

If ‘Ava House’ is the weakest link than ‘Mexican Guitars’ is the better than good track. I know it’s early in the year but I doubt if there will be another song that can compete for the title punkrock song of the year. Well maybe ” Nice Things’ one of the last songs on this record.

If I have to compare On The Impossible Past with any other record it would be Bouncing Souls Anchors Aweigh. Both records, in my opinion, have a kind of dark melancholy over them. They just sound like classics you keep returning to year after year.

I’m old enough to remember the time that you could buy any Epitaph release knowing it would be quality punkrock from start to finish. Though the label has broadened their roster a lot, it’s good to see that they still have that inner gut feeling of what good punkrock is. They already proved it by picking up Off With Their Heads and The Menzingers is just another example of this.