The Story So Far + The American Scene + Life’s Too Short For Us @ Dynamo, Eindhoven 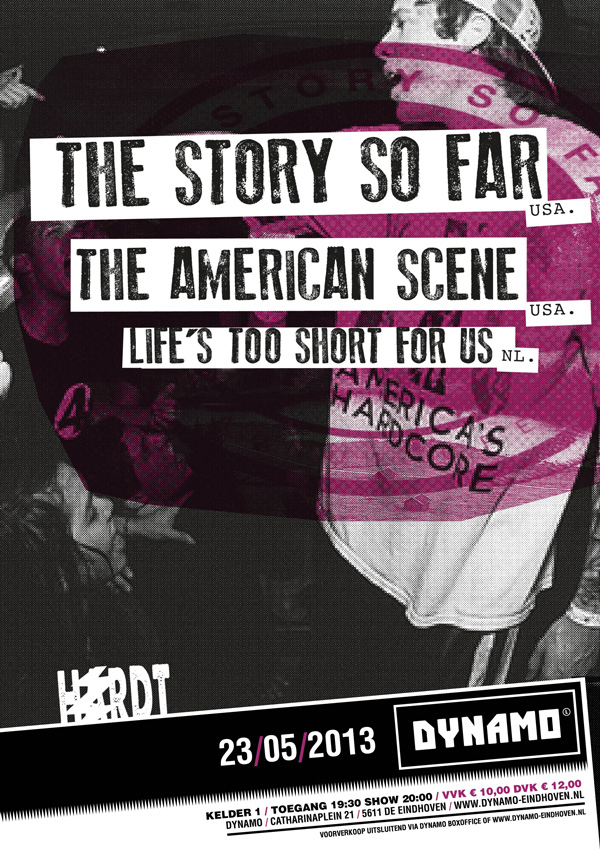 It’s one of those rare sights at shows these days for me, seeing kids come in with mom and dad because they are simply too young to go to a show yet (although that’s always disputable). Poppunkers The Story So Far manage to generate that sight for me and it makes me glad. It reminds me that this music still draws people, who might feel drawn towards the harder styles at a later point in their lives. They might as well turn into suit and tie guys who listen to Kanye West, but right now there’s hope. But I disgress, back to the show.

Opener for this show is Life’s To Short For Us, a decent poppunk band from the Netherlands. They play strong and energetic tonight, getting the first moves going in the big hall of the venue. The stage has been built in front of it, which gives a cozy effect to the show (something that a stage high up sort of hampers). If the audience enjoyed itself as much as these guys, we’ve got a good night ahead of us. The sound is a bit of that run of the mill Blink 182, Four Year Strong and Wonder Years style, with a bit more muscles to it. Shirts and CD’s are sold for 2 euro’s, a bargain for those willing to support these guys.

Much can be said about The American Scene, but I find it hard to warm up to their spheric, slow and mainly dull sound. The energy of the show just comes crashing down during their set, though they seem to be trying pretty hard. I’m willing to blame the sound for this, since these guys take on a pretty dificult approach that really falls flat with a bad PA. Tonight it does, and that’s a shame.

It turns out everything was just a prelude for the storm that is unleashed when The Story So Far starts playing. Again, the sound is not really pleasing this bands quality, but the energy and enthusiasm breaks through anyway. The fans are going wild and it doesn’t take more than 5 mins for the first person to climb one of the speaker stacks and the kids all sing along to the melodic songs. The band obviously plays much work from their new album, which launched them big time. The band plays pretty tight, aggressive and all for their fans. Unfortunately, the show is scheduled to end timely and so it goes that tonight’s story comes to a sudden end. It was a good show, but according to some critical visitors it wasn’t as good as what they demonstrated on Groezrock.

Bands: The Story So Far, The American Scene, Life's To Short For Us