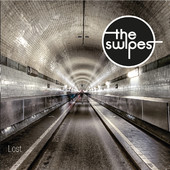 This band comes from Germany, but The Swipes don’t really sound like that. The band originates from Frankfurt am Main and they feel inspired by bands that rock the retro sound like The Hivesand The International Noise Conspiracy. Their album is titled Lost.

So no regular punkrock for these guys. The music is drenched in the sixties mod vibe, with some garage rock jangling added. Think of The Jam meets The Clash.

The album opens with the title track and a riff that seems to be stolen from The Kinks without much scruple. Soon it becomes a smooth rock song, without much a of a bite. The production of the songs is very neat and clean. ‘Tick Tack Time Machine’ and ‘The World Would Be Better Without You’ seem to follow much the same pattern. The band can also play smoothly on ‘Save & Kill’, with a slick sexy sound.

Strangely, the band remind me a bit of The Levellers in those gentle, clean songs they have on their album. The Swipes don’t have much of a kick to it and that’s not the great compliment you’d want, playing this music. So no, not much punk here. One cool song is the very long, guitar bursts filled ‘The Return Of The Agents From Outer Space’.

Alright, so I’m not to fond of this album. That’s personal however, because this band plays very, very good songs and they seem to know what they want with their sound. The label punk doesn’t really apply though.