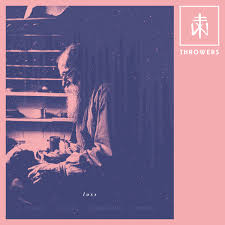 Throwers started in 2011, did a lot of shows and released two Eps. The last EP in 2014 was a startup for this new record that finally is unleashed on the masses. Rooted in the German DIY scene and from the same city as Men in Search for the Perfect Weapon, Perth Express and Black Freighter are taking the path of a whirlwind combination of chaotic hardcore and metal. Think of Old Man Gloom, Converge or KEN Mode but never forgetting the crusty, full speed hardcore background.

That being said I was looking forward to hear ‘Loss’ and after popping in the record for the second time I was still disappointed. Did I expect too much? Maybe… In the first three songs I hear a lot of energy, but never a catchy riff or a hook. It’s in ear and out the other. Also the voice is average and doesn’t have the crunch to overwhelm and kick your ass.

It seems like the band didn’t really have a creative leader that had a vision how the songs needed to be shaped to put ‘Loss’ on the map. I expected more from a band that is around from 2011 and toured constantly. Maybe they focused too much on touring instead of rehearsing/creating songs.

Does this mean the chaotic whirlwind is a complete disaster? No, especially the slower parts of ‘Homecoming’ and ‘Assigning’ have a dragging and threatening environment and finally I can see what the band wants to achieve. ‘Unarmed’ is also a decent song. In the end two, perhaps three songs stand out, unfortunately that’s not enough to impress.

When reaching the last song I hoped ‘Nevermore’ ended “Loss” as a killer but the chaotic energy somewhere got lost in the studio. I’ve tried to like Throwers first full length four or five times; every time I get distracted because I barely hear that killer riff or that exciting fast outbreak. I miss the power combined with songwriting skills of the above mentioned bands to make impact on the listener.

Or check out their bandcamp. The album is not yet on there, but two songs of the EP were re-recorded for this album.