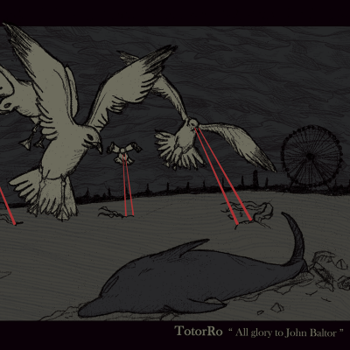 Who the fuck is John Baltor you’ll think? I didn’t knew either so I did some research and found out on Facebook he’s from the USA and was in the US Navy. Afterwards he travelled the world and that’s it. I don’t know why all the glory has to go to John Baltor. Maybe the French guys of Totorro know.

Anyway, the postrock/metal band has made a four song record that totally follows the paved paths and it’s no wonder these copycats found a label in the land of the copycats (Japan). Their material is decent and instrumental in the first one and a half song. In the first song All Glory To John Baltor they reach the same rooftops as Explosions in the Sky and they continue that path in Lavate Las Manos  until the sound gets heavier and one of the musicians starts to scream. Then the postrock melodies melt with the layers Rosetta creates in their atmospheric metal.

This nice surprise continues in the last two songs. The repeating drums accompany  the guitar melody until the intense screaming once again releases the build up tension in The Stamped. This highlight lasts for almost 15 minutes. The last song, The Yellow One, continues in the same way. Halfway during the song, in a break, the clapping hands part is a brilliant idea and gets you focused on the song again.

At first I thought  ‘All Glory To John Baltor’ might be a redundant release, in the end that’s not true because fans of the genre receive quality and beautiful melodies. So suckers for this genre should take notice.