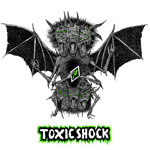 On Daily Demons, their debut full length, Belgium’s Toxic Shock bring back the exciting part of the 80’s music scene. The part where Glen E. Friedman would get out to shows with his camera and be the only attending photographer instead of the rest of the room also watching the show through their smartphone screens. Skateboard videos had fast metal and hardcore as their soundtrack instead of slow electronic beats and people went to shows to have fun, get loose and come home with ripped shirts, bruises on their body and the feeling they had experienced something different than your average person. Disclaimer: I was not ‘there’ in the 80’s, but this much I can gather from books, documentaries and records.

The excellent musicianship aside the most important aspect of listening to Daily Demons is the fun these guys can get across. Cause you know what? It’s actually fun to write, record and perform. And I think that’s a part of music that lots of bands in all their seriousness forgot to get across to their audience.

What attracted me so much in those first Municipal Waste shows was that here was a band having fun, a band enjoying what they do and inviting the audience to attend the party as well. Pretty much the same kind of feeling I get when listening to this full length.

‘On Thin Ice’ is a great example of what you can expect from Daily Demons:

Though I expected something good coming from this band after they managed to get Reflections interested I didn’t expect Daily Demons to be this good. I’m not someone who regularly listens to 80’s trash bands or their contemporaries but after I played Daily Demons for a week I found myself revisiting Metallica’s Kill Em All and Exodus’ Bonded By Blood. Any band that can make me do that is worth to be checked out by everyone.