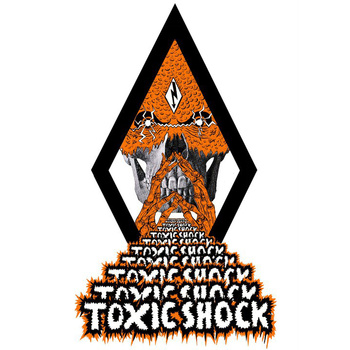 Toxic Shock from Belgium features (ex) members of Damaged Goods and Bite Down amongst others. I loved the Damaged Goods demo back in 2006 and put em on the “European New Breed” compilation I did in 2007, so I was curious to hear this new band’s demo.

As expected it’s fast and pissed hardcore, but this time they added even more metal like riffs. If someone would have told me this was a lost demo of a 80’s crossover band I would have believed them right away. Suicidal Tendencies and Excel for instance come to mind. Not only the music, but the whole packaging has that 80’s vibe.

The packaging needs a special mention anyway. The artwork (I have no idea who did this because it isn’t mentioned anywhere) is great. All black and white with a nice touch of orange. You know you’re in for some toxic stuff when you put the bright orange tape in your cassette deck. The lyric sheet is printed on or mixed up with an instruction manual for iodine tablets. I love stuff like that. While we mentioned the lyric sheet, the lyrics are dealing with zombies in Zombie gathering, people sucking in You Suck! and the rape of our mothers (? I’m probably missing some horror flick reference or something) in Mother Of All Mothers. Oh well, it works with the music.

All in all this is a solid demo and people who are into the bands I’ve mentioned above (and similar) should definitely check this band out. I’m curious to see what they come up with for their next release.