Transplants – In A Warzone 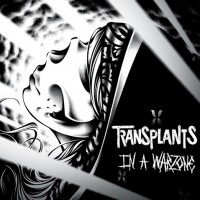 So the Transplants never really were a band that I thought was that interesting, simply due to the immediate hype concering that debut album. However, they are still making music and have released their third album in their eleven years existence titled In A Warzone. It’s not as bad as I thought.

The influence of bandmembers seems to have shifted. Where the first album clearly showed the hit-single sensitivity of Travis Barker and the second had a lot of hiphop going on, this album has Tim Armstrong written all over it. His love for punkrock and some reggae is detectable, making the record sound a bit like Rancid with a wallop of Sublime.

‘In A Warzone’ is a full on, primitive punkrock song with driven, nervous guitar work and shout-along vocals. The pace is high, the fun about as much with shredding guitars. Rancid’s sound is all over ‘See It To Believe It’, a laid back guitar work and the good old droning rhytm keeping it basic. A bit of the rock’n’roll vibe can be felt on ‘Back To You’ with a little of those bluesy vocals of Armstrong himself.  Then we slow down on ‘Come Around’, down to the hiphop beats of ‘Something’s Different’.

‘Silence’ and ‘Any Of Them’ are next up, and both are catchy, high paced punkrock songs. Then the album suddenly switches to a different vibe again, rather gradually, but it keeps feeling weird and not really coherent. It definitly has good songs and a fun vibe. It’s neither punk, nor hiphop but hangs in between there and that’s clearly where songs like ‘Gravestones And Burial Plots’ wish to be.

The album closes with one of it’s weakest songs however, ‘Exit The Wasteland’ will not make you remember Transplants or their last release.