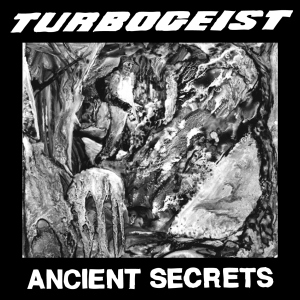 Imagine Babyshambles playing with The Damned and you’ve got the experience of Turbogeist on their EP Ancient Secrets. Strangely released on Spinefarm, a label known for it’s rich history with melodic deathmetal and other Nordic grimness, these guys play a decadent bit of punkrock.

Alright, so they do sound remarkably like The Libertines (for those who are not familiar with the earlier named incarnation), but on the right drugs, with a heavy dose of the fast punkrock of yesteryear. ‘Mermaid’s Revenge’ immediately shows that with these thick accented vocals, a bit like Jamie T at times even. It gives the band a poppy quality.

‘Zero Friends’ sounds like a bullied kid crying his heart out, opening with an intro that reminds me so much of the simple things in life. ‘Black Hole’ has a bit more speed and energy to it and the basics of a more Zeke styled song. Same goes for ‘Upfront’, which has some typical teen angst and nervousness to it that gives it a real nice, though very melodic sound, bringing back the late nineties.

‘Rats’ is a surprise however, unfolding from a driven hardcore song remniscent of Gallows into a blown out stoner rock riffing contest The Sword could come up with. These punks do surprise their listeners with a large variety of sounds on this short record. Still well worth it to give Turbogeist a listen.